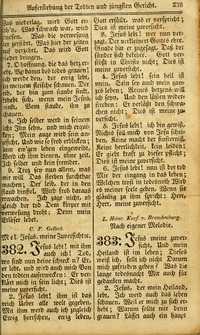 Gellert, Christian Fürchtegott, son of Christian Gellert, pastor at Hainichen in the Saxon Harz, near Freiberg, was born at Hainichen, July 4, 1715. In 1734 he entered the University of Leipzig as a student of theology, and after completing his course acted for some time as assistant to his father. But then, as now, sermons preached from manuscript were not tolerated in the Lutheran Church, and as his memory was treacherous, he found himself compelled to try some other profession. In 1739 he became domestic tutor to the sons of Herr von Lüttichau, near Dresden, and in 1741 returned to Leipzig to superintend the studies of a nephew at the University. He also resumed his own studies. He graduated M.A. 1744; became in 1745 private tutor or l… Go to person page >
^ top

Jesus lebt, mit ihm auch ich. C. F. Gellert. [Easter.] First published in his Geistliche Oden und Lieder, Leipzig, 1757, p. 147, in 6 stanzas of 6 lines, entitled "Easter Hymn." The keynote of this, one of Gellert's finest hymns, is St. John xiv. 19. It is in the metre and has reminiscences of "Jesus, meine Zuversicht", but has yet a genuine lyric character of its own. It passed into the Berlin Gesang-Buch, 1765, and almost all later German hymn-books, and is No. 304 in the Berlin Geistliche Leider, edition 1863. Since 1861 hardly a hymn-book of importance has appeared in English-speaking countries without containing some version of it.

Originally written and still generally used for Easter, it is very appropriate for use by the dying, or for the consecration of a graveyard. It has often recently been sung at funeral services, e.g. at the Lord Mayor's funeral (G. S. Nottage), in St. Paul's, April 18, 1885; at that for Bishop McDougall of Labuan, in Winchester Cathedral, Nov. 19, 1886, &c.

HURSLEY is a Protestant French Huguenot melody by an anonymous composer. 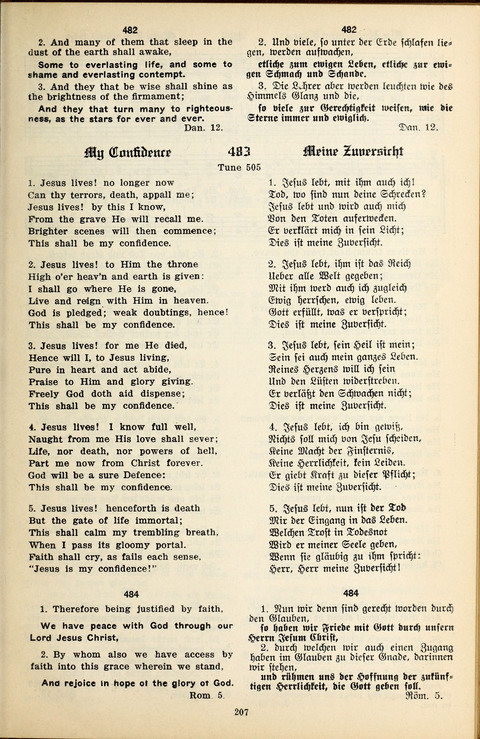