Jesus, our mighty Lord, our strength in sadness 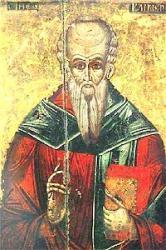 Clemens, Titus Flavins (Clemens Alexandrinus), St. Clement of Alexandria, was born possibly at Athens (although on this point there is no certain information) about A.D. 170. His full name, Titus Flavins Clemens, is given by Eusebius (H. E., vi. 13) and Photius (Cod. Ill), but of his parentage there is no record. Studious, and anxious to satisfy his mind on the highest subjects, he is said to have been a Stoic and Eclectic, and a seeker after truth amongst Greek, Assyrian, Egyptian, and Jewish teachers. He himself enumerates six teachers of eminence under whom he studied the "true tradition of the blessed doctrine of the holy apostles." At Alexandria he came under the teaching of Pantsenus, and embraced Christianity, Pantsenus being at the… Go to person page >
^ top

Titus Flavius Clemens, known as Clement of Alexandria (b. Athens, Greece, c. 170; d. Palestine [?], c. 220), was a student of Greek philosophy who was converted to the Christian faith. One of his poems, translated as "Hymn of the Savior Christ," featured a series of metaphors, some biblical, addressed to Christ, and became one of the earliest known Christian hymn texts. It was appended to the third section of a treatise called The Tutor (around 200); both the treatise and the hymn were evidently used in the catechizing of new converts to Christianity. An important philosopher and theologian in the Eastern church, Clement became head of the famous catechetical school in Alexandria, where he stressed Christ, the Word, as the true teacher. In 202 Clement fled from Alexandria to Palestine because the Christians were being persecuted. Little is known of his later life.

The traditional translation of his Greek text begins "Shepherd of Tender Youth." An English version was prepared by Henry Dexter in 1846 (see the 1959 Psalter Hymnal 414). Like other recent hymnals, the 1987 Psalter Hymnal provides a paraphrase of the text by F. Bland Tucker (PHH 247). That version, prepared for The Hymnal 1982, borrows from Tucker's older paraphrase of Clement's text, which appeared as "Master of Eager Youth" in The Hymna11940.

Tucker's more recent paraphrase includes some of the most important New Testament expressions for the Savior: Jesus, our Lord, is the Word (st. 1); the Good Shepherd and the Way (st. 2); and the God of peace (st. 3).

Liturgical Use:
With preaching on New Testament texts that concern Christ as the Word, Shepherd, Way, King, and Savior; profession of faith by young people; family life and youth services.

ROSE-MARIE was one of several tunes submitted for this text during a hymn search announced by the Psalter Hymnal Revision Committee. Dutch musician Wim Mennes composed ROSE-MARIE for this text in 1984 in Noordwolde, the Netherlands. The tune is named in honor of Mennes's daughter. ROSE-MARIE thrives…

All tunes published with 'Jesus, Our Mighty Lord'^ top