Jesus the great and mighty Lord 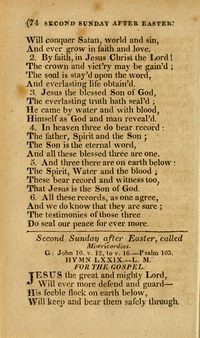 Jesus the great and mighty Lord

1 Jesus the great and mighty Lord,
Will ever more defend and guard--
His feeble flock on earth below,
Will keep and bear them safely through.


2 He loves them, with a tender love,
And ever so to them will prove;
His love is great, beyond degree:
He died for them, to set them free.


3 He is their Shepherd, Lord and Friend!
To all their cries he will attend;
He feeds them with his word and grace,
And will preserve them all their days.


4 He knows his Sheep, they hear his voice,
He is their Shepherd, and their choice;
He knows his flock, he calls their names,
He guards and feeds his tender Lambs.


5 But mark! this passage plainly shews:
This flock here mention'd was the Jews;
And as the Saviour died for all,
The Gentiles too receiv'd a call.


6 And Christ the Saviour, well fore knew,
That they would b'lieve his doctrine too;
He called them, another fold,
Besides the Jew's, the flock of old.


7 It was to them, a joyful new's,
To share the Gospel with the Jews;
Therefore with them they freely join'd,
And were with them one heart and mind.


8 O, may our hopes not be in vain!
Shortly to have such times again--
Should we who daily heap our crimes?
Expect to see such precious times!

Source: Church Hymn Book: consisting of newly composed hymns with the addition of hymns and psalms, from other authors, carefully adapted for the use of public worship, and many other occasions (1st ed.) #LXXIX

Church Hymn Book; consisting of hymns and psalms, original and selected. adapted to public worship and many other occasions. 2nd ed. #160