Jesus, We Love to Meet 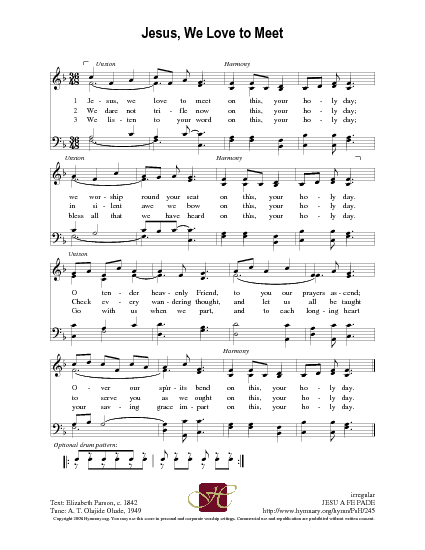 Jesus, we love to meet On this thy holy day

Author: Elizabeth Parson (c. 1842)
Tune: [Jesus, we love to meet on this Thy holy day]
Published in 66 hymnals

Parson, Elizabeth, nee Hooker, daughter of the Rev. W. Rooker (for nearly fifty years Congregational Minister at Tavistock), was born at Tavistock, June 5, 1812, and married in 1844 to Mr. T. Edgecombe Parson. She died at Plymouth in 1873. Previous to her marriage (from 1840 to 1844) Mrs. Parson conducted a class for young men and women in the vestry of her father's chapel on Sunday evenings, and to which was given the name of the “Willing Class," because those who came, came "willingly." For this class she wrote from 1840 to 1844 several hymns, some of which came into use through various collections including the Baptist Psalms & Hymns, 1858, and others at a later date. A few years ago 18 of these hymns were collected, and printed for pr… Go to person page >
^ top

A marvelous gathering hymn, especially for gathering around the Word of God for Sunday Worship, “Jesus, We Love to Meet” explains why we come together and how we are to worship and serve our God. Elizabeth Parson (b. Tavistock, England, 1812; d. Plymouth,England, 1873) wrote the text in the early 1840s for her Sunday-evening Bible class for youth (known as the “Willing Class” – whose members came voluntarily) at the Congregational church in Tavistock, England, where her father, W. Rooker, was pastor. She taught that class for some years before her marriage to T. Edgecombe Parson in 1844. Altogether Parson wrote eighteen hymns for this class, which were later published in various children’s hymnals and hymn collections during the second half of the nineteenth century, such as the Baptist Psalms and Hymns (1858).

Abraham Taiwo Olajide Olude (b. Ebute-Metta, Lagos, Nigeria, 1908; d. Lagos, 1968) learned the song at a missionary school in Nigeria during the 1940s. He translated the text into Yoruba and composed a tune for it. The new setting was first performed at Abeokuta, Nigeria, in 1949 at a service designed to popularize indigenous Yoruban music in Christian worship. Educated at Wesley College, Ibadan, and at the Mindola Training School in Nigeria, Olude became a pioneer in using African music in Christian worship. He believed that the “white” hymnody introduced by the European and American missionaries was an intrusion into African culture, and he proposed that African music, including the extensive use of drums and other indigenous instruments, be a part of religious services. Olude served a number of churches as both pastor and choir director and from 1937 to 1950 made frequent tours all over Nigeria with his choirs. He was honored by the University of Nigeria with a Mus.D degree.

The hymn came to North America in 1962 when the American hymnologist and composer Austin Lovelace received a number of indigenous African hymn tunes to consider for publication. Especially pleased with thistune of Olude, Lovelace contacted the United Nations to ask if someone there could help him translate the text into English. He was delighted to find that Biodun Adebesin, who was then serving at the U.N., could not only help but also knew Olude, having sung in his choir years earlier! Adebesin translated the text into English prose, which Lovelace then versified to the meter of the Nigerian tune. Neither of them knew the text had originally been written in English. The result of their work, “Jesus, We Want to Meet,” was published in The Methodist Hymnal(1964) and later in Hymns for the Living Church (1974).

When the Psalter Hymnal Revision Committee inquired for permission to publish the English translation, it learned that someone had discovered an earlier English poem that was clearly related to Olude’s text. The poem was none other than the one Elizabeth Parson had written in the 1840s. The revision committee found a printed copy of her poem in A Private House of Prayer (Weatherhead, 1958) and decided to use the original text. Parson’s English text and Olude’s Nigerian music, then, are first published together in the 1987 Psalter Hymnal. The only textual changes are from the pronouns “thee” and “thy” to “you” and “your.”

Liturgical Use:
Opening of worship; as a sung prayer for illumination; as a refrain at three points in the worship service: stanza 1 at the beginning, stanza 2 before proclaiming the Word, and stanza 3 at the end.

[Jesus, we love to meet on this Thy holy day]

All tunes published with 'Jesus, We Love to Meet'^ top 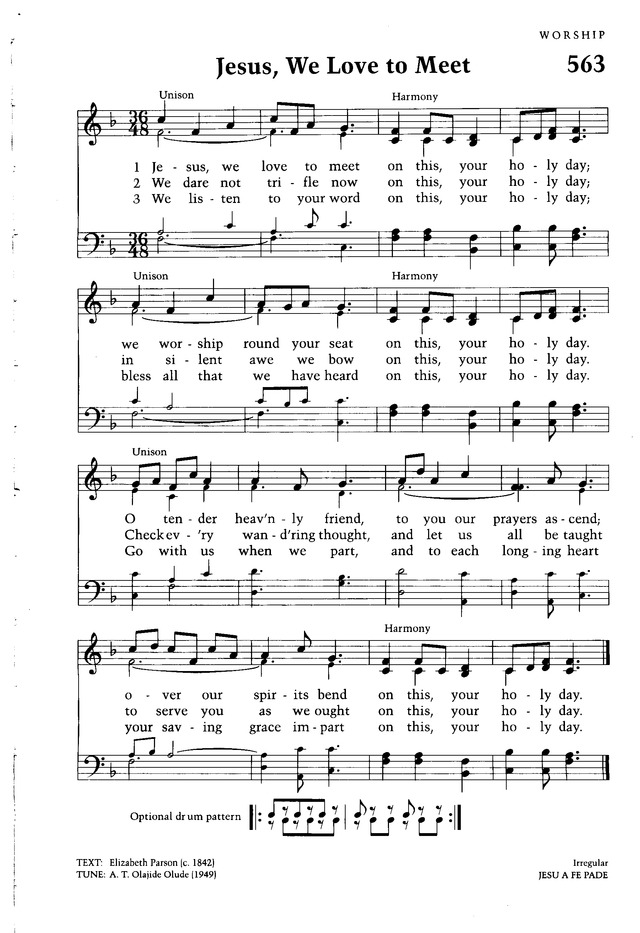