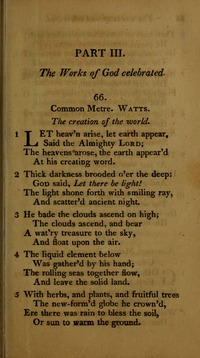 
3 He bade the clouds ascend on high;
the clouds ascend, and bear
a wat’ry treasure to the sky,
and float upon the air.
4 The liquid element below
was gather'd by his hand;
the rolling seas together flow,
and leave the solid land.


5 With herbs, and plants, and fruitful trees,
the new-form'd globe he crown'd,
ere there was rain to bless the soil,
or sun to warm the ground.
6 Then high in heav’n’s resplendent arch
he plac'd two orbs of light,
he set the sun to rule the day,
the moon to rule the night.


7 Next, from the deep, th’ Almighty King
did vital beings frame;
fowls of the air of ev'ry wing,
and fish of ev'ry name.
8 To all the various brutal tribes
he gave their wondrous birth;
at once the lion and the worm
sprung from the teeming earth.


9 Then, chief o’er all his works below,
at last was Adam made;
his maker’s image bless'd his soul,
and glory crown'd his head.
10 Fair in the Almighty Maker’s eye
the whole creation stood;
he view'd the fabric he had rais'd;
his word pronounc'd it good. 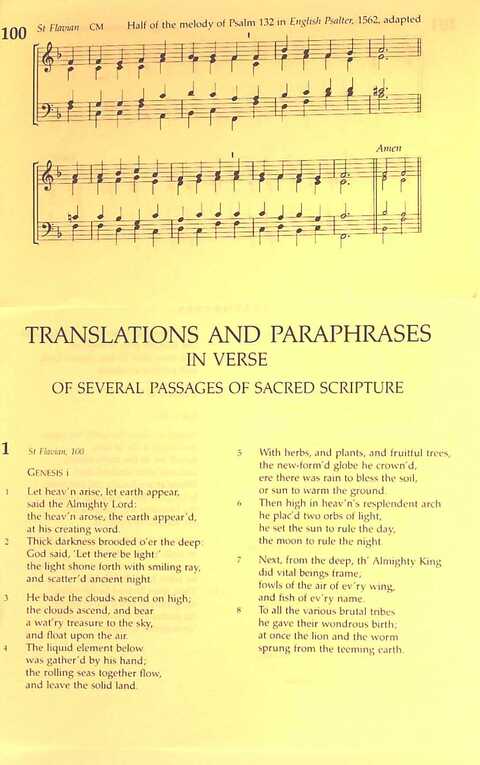