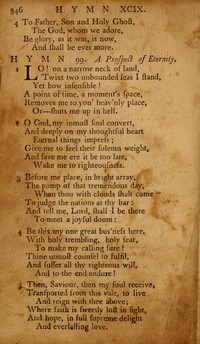 Lo! on a narrow neck of land

1 Lo! on a narrow neck of land,
'Twixt two unbounded seas I stand,
Yet how insensible!
A point of time, a moment's space,
Removes me to yon heavenly place,
Or--shuts me up in hell.


2 O God, my inmost soul convert,
And deeply on my thoughtful heart
Eternal things impress;
Give me to feel their solemn weight,
And save me ere it be too late;
Wake me to righteousness.


3 Before me place, in bright array,
The pomp of that tremendous day,
When thou with clouds shalt come
To judge the nations at thy bar:
And tell me, Lord, shall I be there,
To meet a joyful doom?


4 Be this my one great business here,
With holy trembling, holy fear,
To make my calling sure!
Thine utmost counsel to fulfill,
And suffer all thy righteous will,
And to the end endure!


5 Then, Saviour, then my soul receive,
Transported from this vale to live
And reign with thee above;
Where faith is sweetly lost in sight,
And hope in full supreme delight
And everlasting love.

Source: The Voice of Praise: a collection of hymns for the use of the Methodist Church #901

Lo! on a narrow neck of land. C. Wesley. This cento in the American Methodist Hymnal, 1905, begins with stanza ii. of "Thou God of glorious majesty" (p. 1169, ii.), at which place we discussed the origin of the verse, "Lo, on a narrow neck of land." Recently a claim has been made in America to the effect that a hymn beginning with this verse has been discovered among some manuscripts of the Georgia Historical Society. The Rev. C. S. Nutter says, in the American Christian Advocate, Mar. 3, 1894, p. 6:—

That the mss. had been examined by Mr. Franklin H. Heard, a magazine writer, who found that, during Charles Wesley's residence in Georgia in 1736 he resided for a time on Jekyl Island with General Oglethorpe and his family. To the wife of General Oglethorpe, who was staying at Savannah, he wrote from Jekyl Island in 1736: "Last evening I wandered to the north end of the Island, and stood upon the narrow point which your ladyship will recall as there projecting into the ocean. The vastness of the watery waste, as compared with nay standing-place, called to mind the briefness of human life and the immensity of its consequences, and my surroundings inspired me to write the enclosed hymn, beginning—
“Lo! on a narrow neck of land,
'Twixt two unbounded seas I stand,'
which, I trust, may pleasure your ladyship, weak and feeble as it is when compared with the songs of the sweet Psalmist of Israel."

From these details we are led to conclude that C. Wesley must have incorporated this hymn in "Thou God of glorious majesty," which was published in the Wesley Hymns & Sacred Poems, 1749.

All tunes published with 'Time and Eternity'^ top 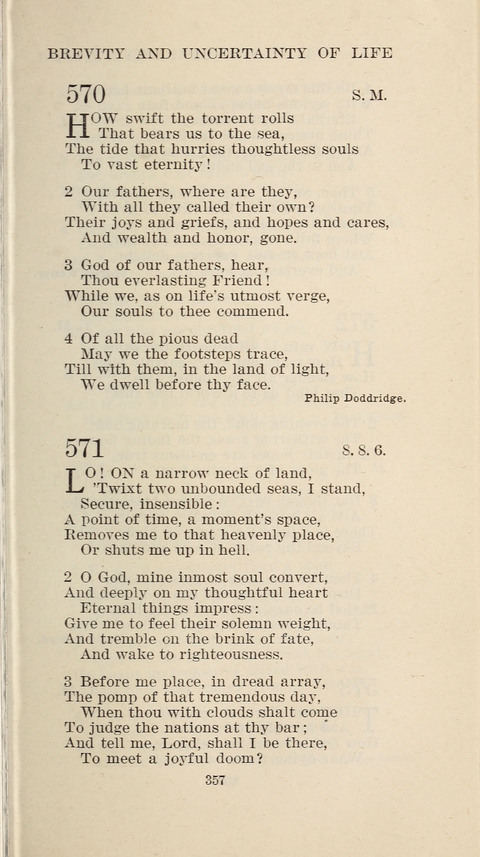