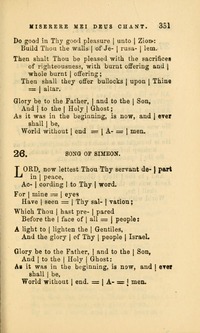 Lord, now lettest thou thy servant depart in peace

Nunc Dimittis. Metrical paraphrases of the Song of Simeon (St. Luke ii. 29-32) are more numerous than those of the Magnificat or the Benedictus. Of these the opening lines of the form of the Old Version given in comparatively modern editions read:—

”O Lord my God, because my heart
Have longed earnestly,
My Lord and Saviour to behold,
And see before I die;
The joy and health of all mankind,
Desired long before;
Who now is come into the world
Lost man for to restore."

2. The New Version paraphrase which appeared in the Supplement thereto in 1701 or 1702 opens thus:—

”Lord let Thy servant now depart
Into Thy promis'd rest,
Since my expecting eyes have been
With Thy Salvation blest."

3. Amongst the old paraphrasers of the Psalms Dr. John Patrick is one of the few who appended versions of the Canticles to their paraphrases. In his Psalms of David in Metre, 1691, the Nunc Dimittis begins:—

”I now can leave this world and die
In peace and quiet rest;
Since that mine eyes, 0 Lord, have been
With Thy salvation blest."

4. The rendering in the Scottish Translations and Paraphrases, 1781, has a somewhat complicated history which is given under, "Now let Thy servant die in peace."
5. Dr. Irons's version in his Psalms & Hymns for the Church, 1875-83, which begins:—"Enough enough, Thy saint had lived," is worthy of attention, and, with a slight change in the opening lines, would make an useful hymn.
6. Other paraphrases, some of much excellence, are annotated in this Dictionary under their respective first lines, or their authors' names. 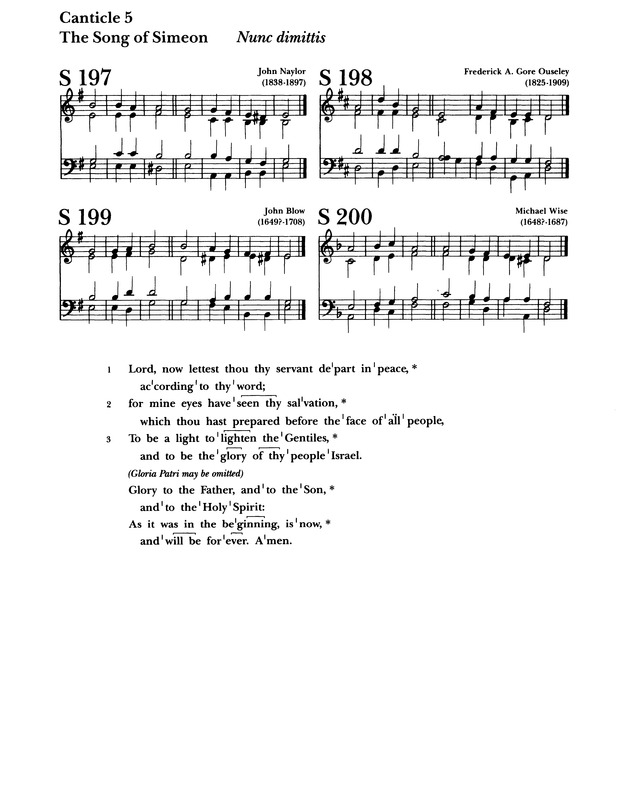