Man by Nature, Grace and Glory 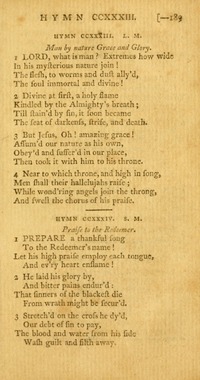 Lord, what is man? Extremes how wide

1 Lord, what is man? Extremes how wide
In this mysterious nature join!
The flesh, to worms and dust allied
The soul immortal and divine!


2 Divine at first, a holy flame
Kindled by the Almighty's breath;
Till stained by sin, it soon became
The seat of darkness, strife, and death.


3 But Jesus, Oh! amazing grace!
Affirmed our nature as his own,
Obeyed and suffered in our place,
Then took it with him to his throne.


4 Near to which throne, and high in song,
Man shall his hallelujahs raise;
While wondering angels round him throng,
And swell the chorus of his praise.


The Hartford Selection of Hymns from the most approved authors, 1799

Lord, what is man? extremes how Wide. J. Newton. [Man by Nature, Grace, and Glory.] Appeared in the Olney Hymns, 1779, Book iii., No. 88, in 6 stanzas of 4 lines, and headed, "Man by Nature, Grace, and Glory." It is the last of the longer hymns given in the Olney Hymns, and would appear to have been designedly placed there as a fitting close to the work, a few "short hymns," and four doxologies only, following. The closing stanza is exceedingly appropriate:—

"Nearest the throne, and first in song,
Man shall his hallelujahs raise;
While wond'ring angels round him throng,
And swell the chorus of his praise."

Although lacking the general interest and popularity of Newton's hymns, it is given in several collections. 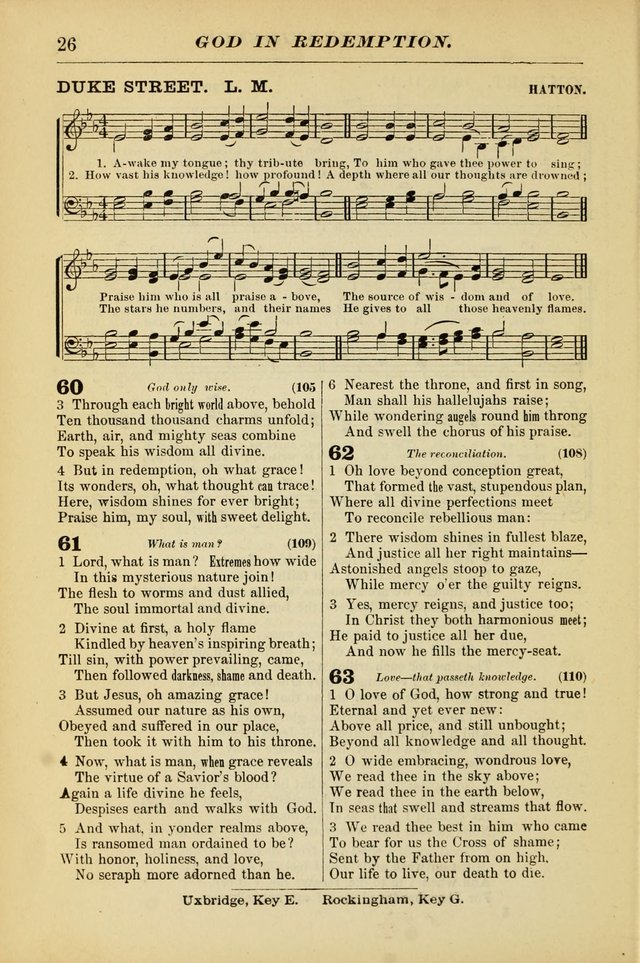 View Page
The Christian Hymnal: a choice collection of hymns and tunes for congregational and social worship (1875), p.26
^ top

A Collection of Hymns and a Liturgy #530

A Collection of Psalms and Hymns #135

A Collection of Psalms, Hymns and Spiritual Songs; suited to the various kinds of Christian worship; and especially designed for and adapted to the Fraternity of the Brethren... #386

A New Selection of Psalms and Hymns from the Most Approved Authors, Adapted to Public and Private Worship. 2nd ed. #d307

A Selection of Hymns and Spiritual Songs #H.CCXCII

A Selection of Hymns and Spiritual Songs #H.CCXCII

A Selection of Hymns from the Best Authors. #A74

A Selection of Hymns, adapted to the devotions of the closet, the family, and the social circle; and containing subjects appropriate to the monthly concerns of prayer for the success... #388

A Selection of Hymns, from the Best Authors, Designed as a Supplement to Dr. Watts' Psalms and Hymns #d389

Christian Hymn and Tune Book, for use in Churches, and for Social and Family Devotions #49

Hymns and Spiritual Songs for the Use of Christians #d83

Hymns and Spiritual Songs for the use of Christians #145b

Display Title: Man by Nature, Grace and Glory First Line: Lord, what is man? Extremes how wide Date: 1803
Hymns and Spiritual Songs for the use of Christians #145b

Hymns and Spiritual Songs, for the Use of Christians #d61

Psalms, Hymns, and Spiritual Songs #B205

The Halifax Selection of Hymns #d266

The Hartford Selection of Hymns from the most approved authors to which are added, a number never before published. #233

The Hartford Selection of Hymns from the Most Approved Authors #CCXXXIII

The Hartford Selection of Hymns #CCXXXIII

Zion's Songster; or a Collection of Hymns and Spiritual Songs, Usually Sung at Camp Meetings, and Also in Revivals of Religion #d136