Love God with all your soul and strength

Love God with all your soul and strength

Love God with all your soul and strength.
With all your heart and mind;
And love your neighbor as yourself:
Be faithful, just, and kind.


Deal with another as you’d have
Another deal with you:
What you’re unwilling to receive,
Be sure you never do.

Known best as the "summary of the law" (Mark 12:28-31; Rom. 13:9; Gal. 5:14; James 2:8), the text derives from two Old Testament passages: Deuteronomy 6:5 and Leviticus 19: 18. The almost direct quotation of these biblical texts comes from the hand of Isaac Watts (b. Southampton, England, 1674; d. London, England, 1748), who published his paraphrase in a relatively unknown volume, Divine Songs Attempted in Easy Language, for the Use of Children (1715). Watts originally wrote the poem in four stanzas of varying meter for the children of the Thomas Abney household, where he lived much of his life. The Psalter Hymnal uses only stanza 1, which is the only Scripture stanza and the only one in common meter.

Watts was a precocious student and voracious reader. As a youth he studied Latin, Greek, French, and Hebrew. He declined an offer to study at Oxford and chose instead to attend an independent academy in Stoke Newington (1690-1694). From 1696 to 1701 Watts was tutor for the family of Sir John Hartopp, and in 1702 he became the pastor of Mark Lane Independent Chapel in London. However, ill health, which he had suffered for some years, took a serious turn in 1712. After that time he served the Mark Lane Chapel only on a part-time basis and moved in to the estate of Sir Thomas Abney to became the family chaplain, a position he held for the rest of his life. During the following thirty-six years Watts was a prolific author–writing books about theology, philosophy (including an influential textbook, Logic), and education, as well as con¬ducting a voluminous correspondence.

Today, Watts is best remembered for his psalm paraphrases and hymns. Many of his contemporaries were exclusive psalm singers. After complaining about the poor quality of many of the psalm paraphrases, the teenager Watts was challenged by his father, "Give us something better!" So he began to write new psalm versifications in which he deliberately chose not to follow closely the King James text but instead to interpret the Old Testament psalms through contemporary British Christian and New Testament eyes.

The next step was to write hymns rather than Scripture paraphrases. What he called "hymns of human composure" established him as the creator of the modern English hymn; he is known as the "father of English hymnody." Altogether, Watts wrote more than six hundred psalm and hymn texts, which were published in his Horae Lyricae (1706), Hymns and Spiritual Songs (1707), Divine Songs . . . for the Use of Children (1715), The Psalms of David Imitated in the Language of the New Testament (1719), and Sermons and Hymns (1721-1727). Most of Watts' texts use the traditional British ballad meters (Short Meter, Common Meter, and Long Meter) and state their theme in often memorable first lines. His work became immensely popular in the English-speaking world, including the United States, where, following the American Revolution, Watts' texts were edited by Timothy Dwight in 1801 to remove their British connotations. Several of his versifications and hymns are still found in most hymnals; especially loved are the paraphrase of Psalm 90, "O God, Our Help in Ages Past" (170), and the hymn "When I Survey the Wondrous Cross" (384).

Liturgical Use:
As a sung "summary of the law" in the service of confession and forgiveness or after the reading of the Ten Commandments; as a frame surrounding a suitable hymn of dedication or commitment, such as 284 or 288. 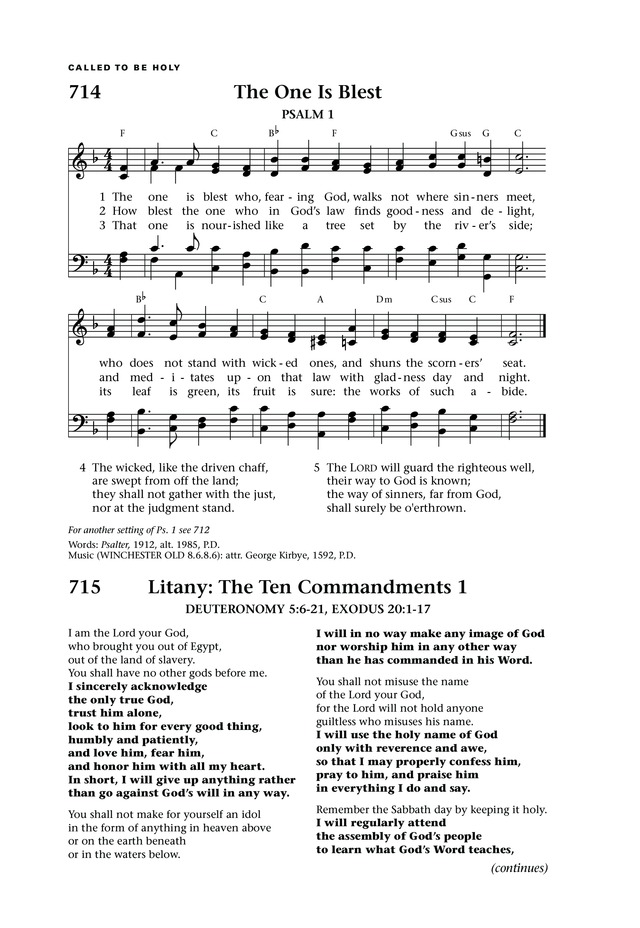