My God, my Father, blissful name 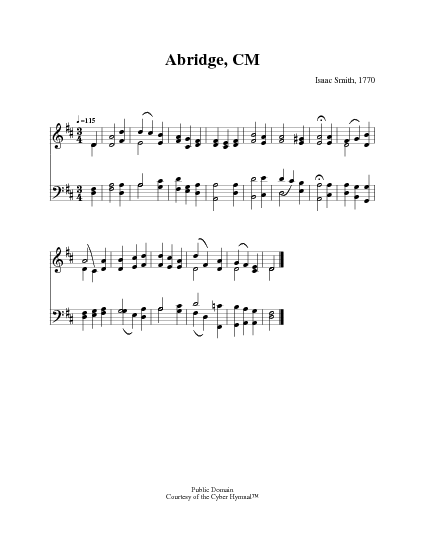 My God, my Father, blissful name

1 My Father! cheering name!
O may I call Thee mine!
Give me with humble hope to claim
A portion so divine.


2 Whate'er Thy will denies,
I calmly would resign;
For Thou art just, and good, and wise,
O bend my will to Thine!


3 Whate'er Thy will ordains,
O give me strength to bear;
Still let me know a Father reigns,
And trust a Father's care.


4 Thy ways are little known
To my weak, erring sight;
Yet shall my soul, believing, own
That all Thy ways are right.

Anne Steele was the daughter of Particular Baptist preacher and timber merchant William Steele. She spent her entire life in Broughton, Hampshire, near the southern coast of England, and devoted much of her time to writing. Some accounts of her life portray her as a lonely, melancholy invalid, but a revival of research in the last decade indicates that she had been more active and social than what was previously thought. She was theologically conversant with Dissenting ministers and "found herself at the centre of a literary circle that included family members from various generations, as well as local literati." She chose a life of singleness to focus on her craft. Before Christmas in 1742, she declined a marriage proposal from contemporar… Go to person page >
^ top

My God, my Father, blissful Name. Anne Steele. [Humility and Trust.] Appeared in her Poems on Subjects chiefly Devotional, 1760, vol. i. p. 114, in 8 stanzas of 4 lines, and headed "Humble Reliance." It was repeated in the 2nd edition of the Poems, 1780, and in Sedgwick's reprint of her Hymns, 1863, p. 70. In its full original form it is not usually found in common use; but the following centos therefrom are given in several hymnbooks in Great Britain and America:—
1. My God, my Father, blissful Name. Composed of stanzas i.-iv., vi.-viii. in the Baptist New Selection, 1828; the Baptist Psalms & Hymns, 1858; the New Congregational Hymn Book, 1859, &c.
2. My God, my Father, charming Name. This is usually No. 1, with the alteration of the opening line.
3. Lord, what Thy providence denies. Composed of stanzas iii., iv., vii., viii. in the 1863 Appendix to the Society for Promoting Christian Knowledge Psalms & Hymns, and others.
4. My God, whate'er Thy will ordains. In Kennedy, 1863, No. 1211, is a cento from this hymn and Miss Steele's "Dear Refuge of my weary soul."

NAOMI was a melody that Lowell Mason (PHH 96) brought to the United States from Europe and arranged as a hymn tune; the arrangement was first published in the periodical Occasional Psalm and Hymn Tunes (1836). Some scholars have attributed the original melody to Johann G. Nageli (PHH 315), but there…

All tunes published with 'My God, my Father, blissful name'^ top 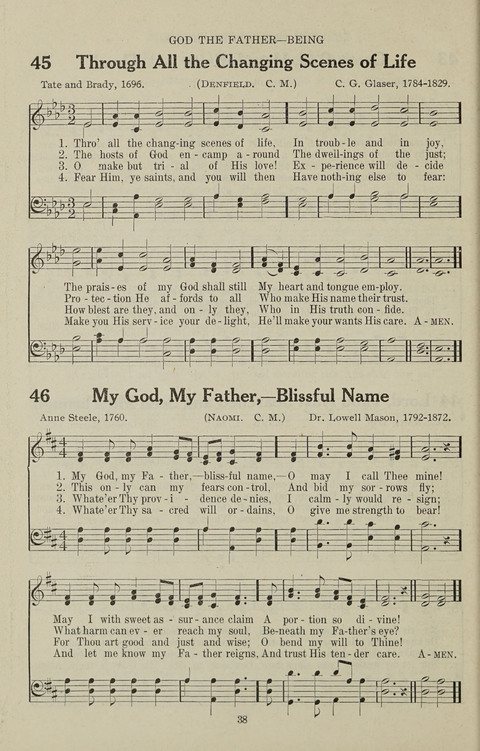