My people close attention give 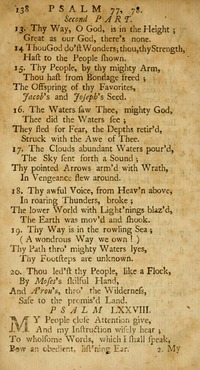 My people close attention give

1. My People close attention give,
And my instruction wisely hear;
To wholesome words, which I shall speak,
Bow an obedient listening ear.
2. My mouth shall parables relate;
And ancient mysteries unfold;
3. Which we our selves have heard, and known;
And what our fathers have us told


4. We'll not conceal them from their sons,
But to the future race make known,
Jehovah's praise, his mighty strength,
And wondrous works which he hath done!
5. A witness he, in Jacob, fixed.
In Israel his good laws ordained;
And charged our fathers, all their seed,
In knowledge of them, should be trained.


6. That generations yet to come,
Piously taught, these things might know;
Their children, yet unborn, might rise.
And them to their descendants show.
7. That they their hope, on God alone,
Through every age, might firmly stay;
The works of God might not forget,
But learn his precepts to obey.


8. And might not, like our fathers, prove
A stubborn, and rebellious race:
Whose heart was not sincere with God,
Nor spirit steadfast in his grace.
9. The armed sons of Ephraim,
Trained to the use of dart and bow,
In day of battle turned their backs,
And meanly fled before the foe.


ID. They broke the covenant of their God,
And did his sacred laws despise:
11. Forgat his works, and miracles,
Which he had wrought before their eyes.


11. He wonders to their father's showed
In Zoan's field, in Egypt's land.
13. He clave the sea, through which they passed,
And made, in heap's, the waters stand.
14. He led them with a cloud, by Day,
And fire, by night; their way to keep.
15. He in he desert, clave the rocks,
And gave them drink, as from the deep.


16. He fetched out streams, from flinty rocks,
They ran, like rivers, by their path.
17. Yet, in the desert, more they sinned;
And the Most High provoked to wrath.
18. For God they tempted in their heart,
By asking meat, as lust them led.
19. Yea, against God they spake, and said,
"Can God, in deserts, tables spread?


20. "'Tis true; he smote the rock, and thence
The waters gushed, and streams o'erflow;
But can he give supplies of bread?
Or flesh, on all this fost, bestow?"
21. Jehovah heard, was very wroth,
And flaming fire on Jacob fell;
His burning anger fiercely rose,
Against unthankful Israel.


22. Because they God would not believe;
Nor in his care and help confide.
23. Though his command, the clouds above,
And doors of heaven, had opened wide.
24. He rained down manna, for their bread;
And gave them corn, from heaven, to eat.
25. Thus man was fed with angel's food!
And to the full he gave them meat.


26. In heaven he made the east wind blow,
And raised the south, by his command.
27. On them he rained down flesh, like dust;
Winged fowl, as seas unnumbered sand.
28. He let it fall within their camp;
And with it spread their tents around.
29. So they did eat, and were well filled;
For thus their own desire he crowned.


30. Their lusting still remained uncured;
But while the meat was in their throat,
31. God's wrath arose, and slew their chiefs;
Down Israel's chosen young men smote.


32. Yet, for all this, they sinned still;
His wondrous works gained no belief.
33. Thence he their days consumed in vain,
Their years in terrifying grief.
34. When some he slew, they fought him then;
And turned to God, with early cry.
35. They called to mind he was their rock,
And their Redeemer, God Most High.


36, But him they flattered with their mouth;
And with their tongues they basely lied.
37. For still their heart was not sincere;
Nor in his covenant did abide.
38. Yet full of mercy, he forgave;
Nor brought them to destruction quite:
Yea, oft he turned his anger by;
Nor once did all his wrath excite.


39. For he remembered, they were frail,
Weak flesh, whose greatest strength is vain;
A puff of wind, which flies away,
And never more returns again.
40. How oft they God provoked, and grieved.
In deserts, where his power was shown?
41. They turned back, and tempted God,
Did limit Israel's holy One.


42. They thought not on the hand, nor day,
Which from their foes deliverance brought.
43. How God his signs, in Egypt's land,
In Zoan's field, his wonders, wrought,
44. He turned their rivers, and their streams,
To blood; they could not drink the gore.
45. Huge swarms of divers flies, and frogs,
He sent to plague, and to devour.
46. To caterpillars, he, their store,
And labors to the locust, doomed.
47. Their cheering vines, he killed with hail;
Their Sycamores with frost consumed.
48. He gave their cattle to the hail;
Their flocks hot thunderbolts devoured.
49. On them he cast his fiercest wrath,
And troops of evil angels poured.


50. He weighed his angel's path, nor spared
From death; the plague upon them came.
51. Egypt's first-born he smote, the chief,
And strength, of all the land of Ham.
52. But forth, like sheep, he led his tribes;
Through deserts his own flock did guide.
53. He led them safely, without fear,
Where, on their foes, he rowled the tide.


54. He them conducted, till they reached
The borders of his holy land;
Till to this mountain they arrived,
The purchase of his own right hand.
55, The heathen tribes, he did expel,
Before their face; to them divide
Their lots by line; and made the tribes
Of Israel in their tents reside.


56. They tempted still, and God Most High
Provoked; nor did his laws obey.
57. They, like their fathers, falsely dealt;
Like a false bow, they turned away.
58. His anger their high places stirred;
Their idols moved his jealousy.
59. When God heard this, then he was wroth,
And loathed Israel vehemently.


60. Then Shiloh's tent he quite forsook;
Where he was wont with men to dwell:
61. The ark of his strength he captive sold;
In hands of foes his glory fell.
62. He gave his people to the sword;
Against his heritage he flamed.
63. Their young men were with fire consumed;
The nuptial songs were rarely named.


64. Their guilty priests fell by the sword;
Nor did their widows scarce repine.
65. Jehovah roused, as one from sleep;
As strong men shout, inflamed with wine.
66. Then, in the hinder parts, he smote,
And put to endless shame, their foes.
67. Yet did he Joseph's tent refuse;
Nor more the tribe of Ephraim chose,


6%. But he selected Judah's tribe;
The mountain Sion, which he loved.
69. There raised his temple up on high;
And fixed it, like the earth, unmoved.
70. He chose his servant David, whom
He from the sheepfold did advance;
71. From tending ewes, Jacob to feed,
And Israel, his inheritance.


72. So he the tribes of Israel led,
With great integrity of heart;
And guided all their state affairs,
With skillful hands, and prudent art. 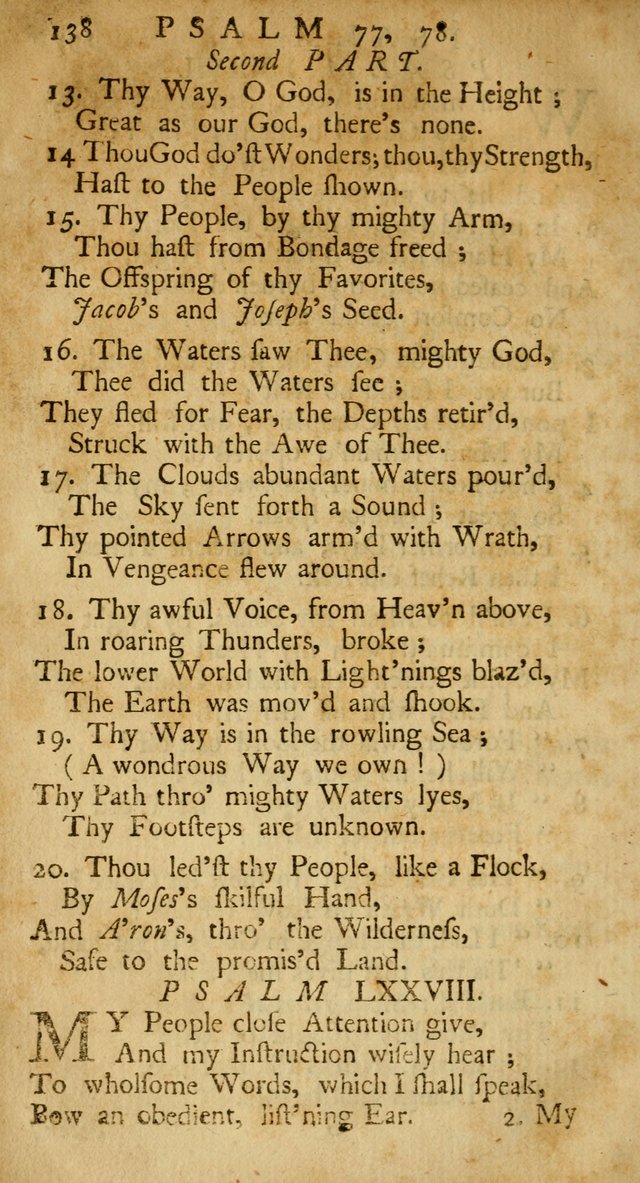 View Page
A New Version of the Psalms of David: Fitted to the Tunes Used in the Churches, With Several Hymns Out of the Old, and New, Testament (1752), p.147
^ top

A New Version of the Psalms of David #138