My soul is filled with joy in God my Savior 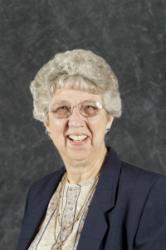 Emily R. Brink is a Senior Research Fellow of the Calvin Institute of Christian Worship and Adjunct Professor of Church Music and Worship at Calvin Theological Seminary, Grand Rapids, Michigan. Her main areas of responsibility are conference planning and global resources. She is program manager of the annual Calvin Symposium on Worship, which draws more than 70 presenters and 1600 participants from around the world. She also travels widely to lecture and to learn about worship in different parts of the world, especially in Asia, where she has lectured in Bangladesh, China, Hong Kong, India, Indonesia, Japan, Nepal, Pakistan, Philippines, Singapore, and Taiwan. Her areas of interest include congregational song from all times and places;… Go to person page >
^ top

The "Song of Hannah," based on 1 Samuel 2:1-10, is another of the "lesser" Old Testament canticles. Hannah sang this prayer of praise and thanksgiving when she brought her son, Samuel, to the tabernacle to serve the LORD. Several of the themes in Hannah's song reappear in the Song of Mary (Luke 1:46-55): both women exalt the LORD for his saving power, for raising the poor from the dust and humbling the proud, and for answering the prayers of his people. (The similarity between Hannah's and Mary's songs is all the more striking when one considers that Hannah first couldn't conceive, whereas Mary, being unmarried, wasn't supposed to!) Initially the term "anointed one" (st. 4) referred to the king of Israel, but later it acquired messianic meaning. New Testament Christians therefore find profound relevance in the Song of Hannah.

Emily Ruth Brink (b. Grand Rapids, MI, 1940) versified this song in 1986 for the Psalter Hymnal. Brink studied at Calvin College, Grand Rapids, and the University of Michigan and received a Ph.D. in music theory from Northwestern University, Evanston, Illinois. She taught music at Trinity Christian College, Palos Heights, Illinois (1967-74), and the University of Illinois, Champaign-Urbana (1974-83). Since 1983 she has served as music and liturgy editor for CRC Publications and in that capacity was editor of the 1987 Psalter Hymnal and Songs for LiFE (1994). She is also editor of the journal Reformed Worship and adjunct professor of worship and church music at Calvin Seminary. Throughout her career she has been active as a church organist and choir director, at Ebenezer CRC in Berwyn, Illinois (1967-1971); at Orland Park (IL) CRC (1972-1974); Hessel Park CRC in Champaign-Urbana (1975-1983); and currently at Eastern Avenue CRC in Grand Rapids.

Liturgical Use:
Occasions of praise to God, whose saving strength guards the "anointed one."

Hughes M. Huffman (PHH 123) composed VIOLA in 1976. InterVarsity Christian Fellowship first published the tune in Hymns II (1976) and used it widely at the 1976 IVCF Urbana Conference as a setting for E. Margaret Clarkson's text "Our God Is Mighty." A strong tune with a bold harmonization that suits…

All tunes published with 'Song of Hannah'^ top