My soul's love I by night did seek 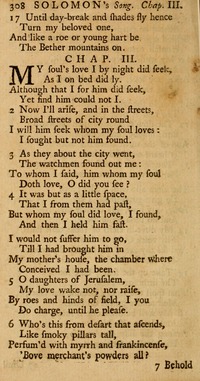 My soul's love I by night did seek


1 By night as on my bed I lay,
when I awak'd; I sought
For the Beloved of my soul;
I sought, but found Him not!
2 Now I'll arise, and in the streets,
and all broad places round,
Him I will seek whom my soul loves:
I sought, but had not found.


3 The watchmen, as I went about
the city, met with me;
Of them I ask'd; HIM whom my soul
most loves, O did you see?
4 But 'twas a very little space,
that I from them had past,
E'er Him whom my soul loves I found,
I seiz'd and held him fast.


Nor would I let Him go till I
had brought Him in to see
My mother's house, the chamber too
who had conceived me.
5 O daughters of Jerusalem,
wake not my Love, nor raise;
By roes and hinds of all the fields,
I charge you, till He please.


6 Who's she that from the desart comes,
as incense-pillars rise?
Perfum'd with myrrh and frankincense,
and powders all of spice?
7 Behold the stately bed of rest
which is King Solomon's,
And round it threescore valiant men,
of Isr'els valiant sons.


8 So dreadful to their enemies,
all warriours skill'd in fight:
Their ready swords girt on their thighs
because of fear by night.
9 Of wood of Lebanon the King
a stately couch has made:
10 Its pillars are of silver form'd,
gold for its bottom laid.


Of purple is the canopy,
arch'd over all above,
For daughters of Jerusalem
the midst is spread with love.
11 O Zion's daughters, go ye forth,
with rais'd delight behold
King Solomon all glorious with
his diadem of gold;


The crown which on his nuptial day
his mother on him plac'd;
The day when gladness fills his heart
and all around are bless'd.

Source: The Psalms Hymns and Spiritual Songs of the Old and New Testament, faithfully translated into English Metre: being the New-England Psalm-Book, revised and improved... (2nd ed.) #SIII 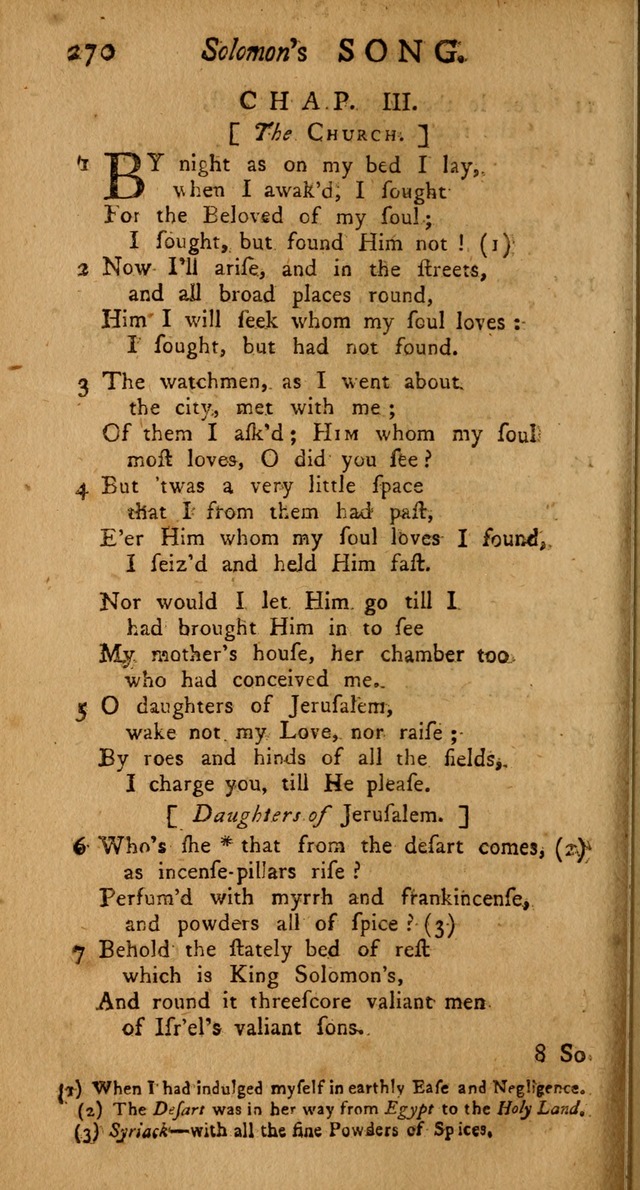 View Page
The Psalms Hymns and Spiritual Songs of the Old and New Testament, faithfully translated into English Metre: being the New-England Psalm-Book, revised and improved... (2nd ed.) (1773), p.270
^ top

The Psalms Hymns and Spiritual Songs of the Old and New Testament, faithfully translated into English Metre #SIII

The Psalms, Hymns and Spiritual Songs of the Old and New Testament, faithully translated into English metre #SSIII

The Psalms, Hymns, and Spiritual Songs of the Old and New-Testament #308

Display Title: The Song of Songs, which is Solomon's: Chap. III First Line: My soul's love I by night did seek Scripture: Song of Solomon 3 Date: 1742
The Psalms, Hymns, and Spiritual Songs of the Old and New-Testament #308
All instances^ top
Suggestions or corrections? Contact us