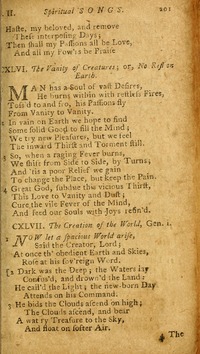 1 "Now let a spacious world arise,"
Said the Creator Lord:
At once th'obedient earth and skies
Rose at his sov'reign word.


2 Dark was the deep; the waters lay
Confus'd and drown'd the land:
He call'd the light; the new-born day
Attends on his command.


4 The liquid element below
Was gather'd by his hand:
The rolling seas together flow,
And leave the solid land.


5 With herbs and plants a flow'ry birth,
The naked globe he crown'd,
E're there was rain to bless the earth,
Or sun to warm the ground.


6 Then he adorn'd the upper skies;
Behold the sun appears;
The moon and stars in order rise,
To mark out months and years.


7 Out of the deep th'almighty King.
Did vital beings frame,
The painted fowls of ev'ry wing,
And fish of ev'ry name.


8 He gave the lion and the worm
At once their wond'rous birth,
And grazing beasts of various form
Rose from the teeming earth.


9 Adam was fram'd of equal clay,
Though sov'reign of the rest,
Design'd for nobler ends than they;
With God's own image blest.


10 Thus glorious in the Maker's eye
The young Creation stood;
He saw the building from on high,
His word pronounc'd it good.


11 Lord while the frame of nature stands,
Thy praise shall fill my tongue:
But the new world of grace demands
A more exalted song.

Source: Church Hymn Book: consisting of newly composed hymns with the addition of hymns and psalms, from other authors, carefully adapted for the use of public worship, and many other occasions (1st ed.) #CCLXIV

Now let a spacious world arise. I. Watts. [Creation.] First published in his Hymns, &c, 1709, Bk. ii., No. 147, in 11 stanzas of 4 lines. Its use is limited. In the 1745 Draft of the Scottish Translations and Paraphrases, No. xxxvii., it was given with the omission of stanza xi., and the change, in stanza ii., 1. 3, of "He call’d the Night” into "He call'd the Light," a change which evidently suggested the form of stanza ii. in the recast of 1781. This recast, which opens, "Let heav'n arise, let earth appear," was given as No. i. (Gen. i. 1) in the authorized Translations and Paraphrases, of 1781, and has been in use in the Church of Scotland for more than 100 years. In the markings of authors and revisers by W. Cameron's daughter, this recast is claimed for him. 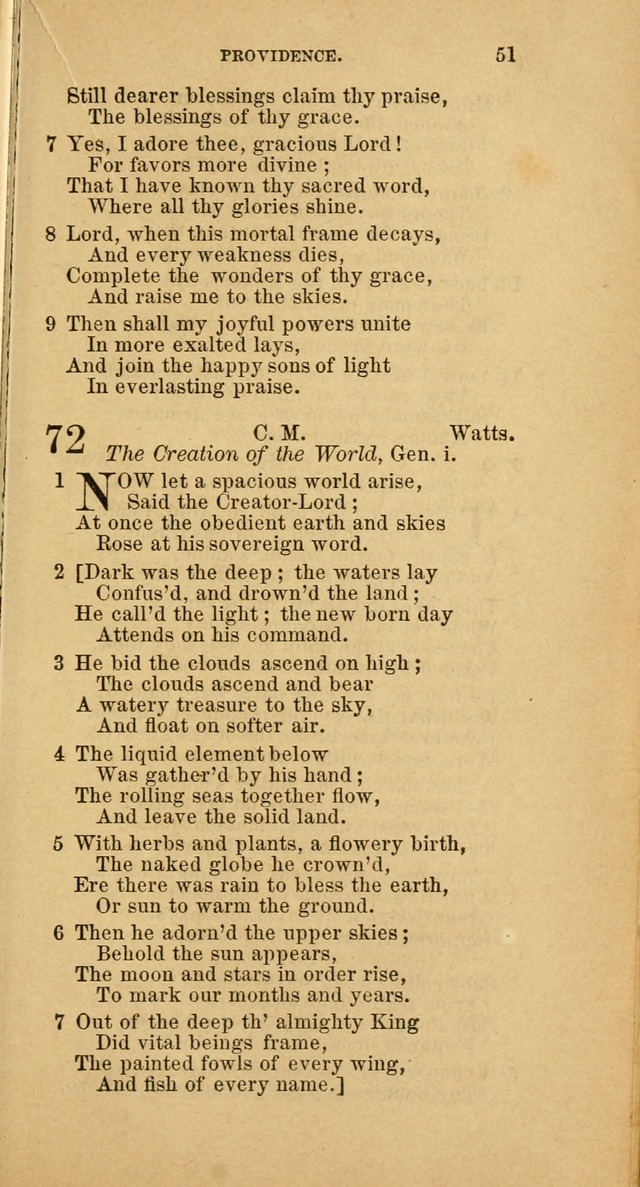 View Page
The Baptist Hymn Book: comprising a large and choice collection of psalms, hymns and spiritual songs, adapted to the faith and order of the Old School, or Primitive Baptists (2nd stereotype Ed.) (1859), p.51
^ top

A Choice Selection of Evangelical Hymns, from various authors #132

A New Selection of Hymns #CLI

Church Hymn Book; consisting of hymns and psalms, original and selected. adapted to public worship and many other occasions. 2nd ed. #334

Psalms and Hymns of Isaac Watts, The #II.147

The Psalms and Hymns of Dr. Watts #55

The Psalms of David #II.CXLVII

The Psalms, Hymns and Spiritual Songs of the Rev. Isaac Watts, D. D. #B147