Now the Laborer's Task Is Over 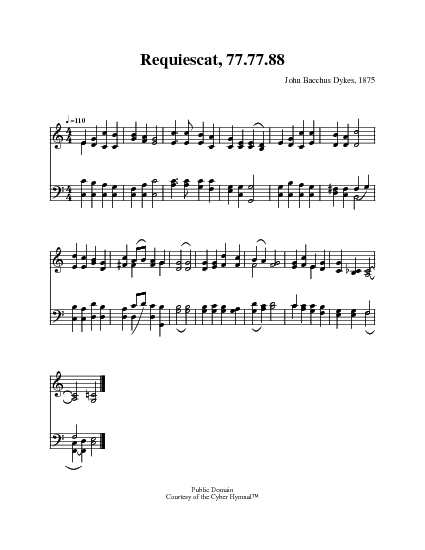 Now the laborer's task is o'er, Now the battle day is past

1 Now the laborer's task is o'er;
Now the battle day is past;
Now upon the farther shore
Lands the voyager at last.


Refrain:
Father, in thy gracious keeping,
Leave we now thy servant sleeping. A-men.


2 There the tears of earth are dried,
There its hidden things are clear,
There the work of life is tried
By a juster judge than here. [Refrain]


3 There the penitents, that turn
To the cross their dying eyes,
All the love of Jesus learn
At his feet in Paradise. [Refrain]


4 'Earth to earth, and dust to dust,'
Calmly now the words we say;
Leaving him to sleep, in trust,
Till the resurrection-day. [Refrain]


(At sea, instead of stanza 4, the following shall be sung:)
5 'Till the sea gives up its dead,'
Calmly now the words we say,
Laid in ocean's quiet bed
Till the resurrection-day: [Refrain]


Source: Service Book and Hymnal of the Lutheran Church in America #296

Now the labourer's task is o'er. J. Ellerton. [Burial.] Written for and first published in the Society for Promoting Christian Knowledge Church Hymns, 1871, in 6 stanzas of 6 lines. Mr. Ellerton says:—

”The whole hymn, especially the third, fifth, and sixth verses, owes many thoughts, and some expressions, to a beautiful poem of the Rev. Gerard Moultrie's, beginning, ‘Brother, now thy toils are o'er,' which will be found in the People's Hymnal, 380" (Notes on Church Hymns, p. liii.)

From Church Hymns this hymn has passed into Hymns Ancient & Modern, Hymnal Companion, Thring's Collection, and many other collections, and sometimes, as in the last named, with the omission of stanza iii. In R. Brown-Borthwick's Select Hymns for Church and Home, 2nd edition, 1885, the original text as it appeared in the first edition of that work in 1871 is given as No. 72; and the revised and authorized text as in Church Hymns, as No. 185. The latter is also in Mr. Ellerton's Hymns, &c, 1888, and may be at once known by the refrain:—

"Father, in Thy gracious keeping
Leave we now Thy servant sleeping."

All tunes published with 'Now the Laborer's Task Is Over'^ top 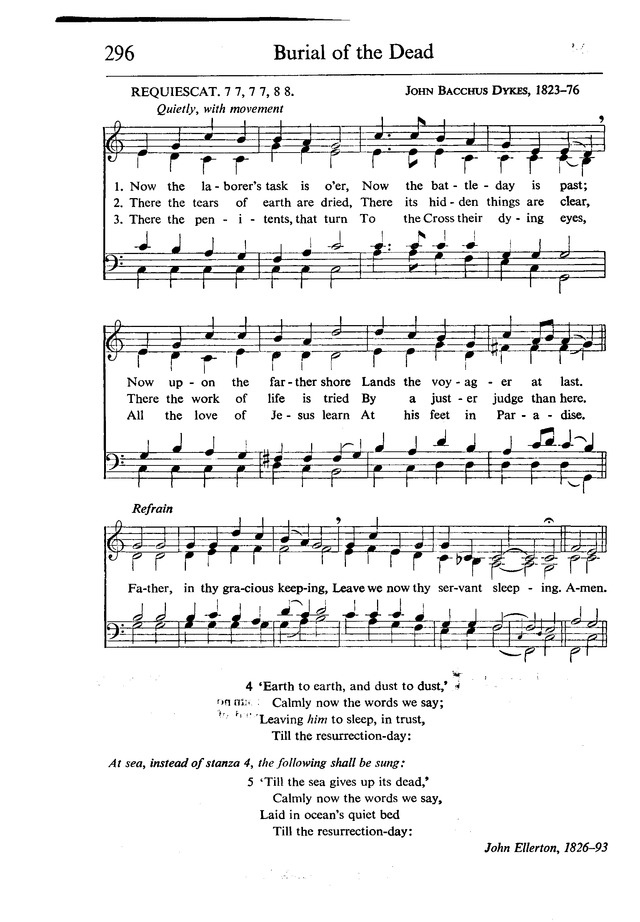