Now while the herald bird of day 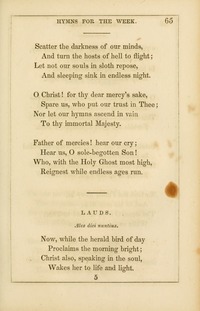 Now while the herald bird of day

Marcus Aurelius Clemens Prudentius, "The Christian Pindar" was born in northern Spain, a magistrate whose religious convictions came late in life. His subsequent sacred poems were literary and personal, not, like those of St. Ambrose, designed for singing. Selections from them soon entered the Mozarabic rite, however, and have since remained exquisite treasures of the Western churches. His Cathemerinon liber, Peristephanon, and Psychomachia were among the most widely read books of the Middle Ages. A concordance to his works was published by the Medieval Academy of America in 1932. There is a considerable literature on his works. --The Hymnal 1940 Companion… Go to person page >

Ales diei nuntius. A. C. Prudentius. [Tuesday Morning.] This hymn is No. 1 in the Cathemerinon of Prudentius, and is in 25 stanzas of 4 lines. The cento in use is composed of stanza i., ii, xxi., xxv. of the poem, and will be found in Daniel, i., No. 103 ; additional notes, ii. p. 382; iv. p. 39. In the Roman Brevieary it is the hymn for Tuesday at Lauds. Also in the Hymnarium Sarisburiense, London 1851, pp. 47, 48; which contains, besides the Sarum text, variations from the York Use; and among different readings from Monastic Uses, those of Sts. Alban's, Evesham, Worcester, Stanza Andrew de Bromholm (Norfolk). It is also in the Aberdeen Breviary and others.

The text of this cento is also found in three manuscripts of the 11th century in the British Museum; in the Latin Hymns of the Anglo-Saxon Church, 1851, p. 18, it is printed from a Durham manuscript of the 11th century; in Macgill's Songs of the Christian Creed and Life, 1876 and 1879 ; and others. [Rev.W. A. Shoults, B.D.]
Translations not in common use:— 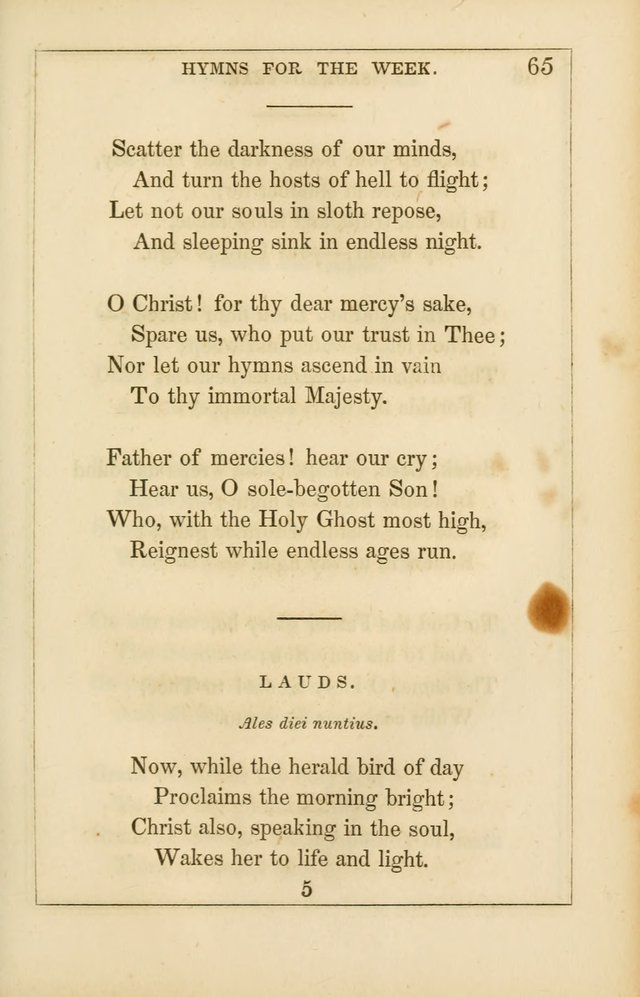 View Page
Lyra Catholica: containing all the hymns of the Roman breviary and missal, with others from various sources. Arranged for every day in the week, and the festivals and saints' days... (1851), p.65
^ top