O Dark Was The Night 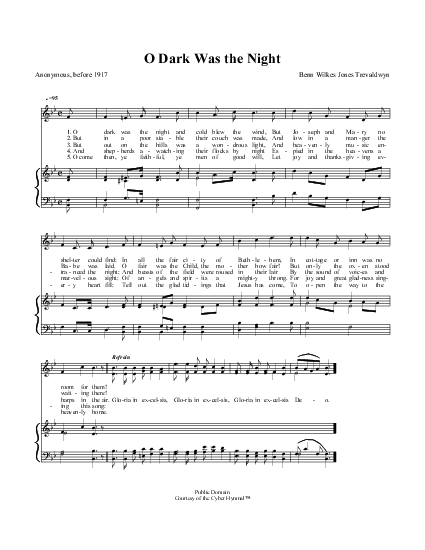 O dark was the night and cold blew the wind

Author: Anonymous (before 1917)
Tune: [O dark was the night and cold blew the wind]
Published in 1 hymnal

1 O dark was the night and cold blew the wind,
But Joseph and Mary no shelter could find;
In all the fair city of Bethlehem,
In cottage or inn was no room for them!


2 But in a poor stable their couch was made,
And low in a manger the Babe was laid.
O fair was the Child, the mother how fair!
But only the oxen stood waiting there! [Refrain]


3 But out on the hills was a wondrous light,
And heavenly music entranced the night;
And beasts of the field were roused in their lair
By the sound of voices and harps in the air. [Refrain]


4 And shepherds awatching their flocks by night
Espied in the heavens a marvelous sight;
Of angels and spirits a mighty throng.
For joy and great gladness singing this song: [Refrain]


5 O come then, ye faithful, ye men of good will,
Let joy and thanksgiving every heart fill;
Tell out the glad tidings that Jesus has come,
To open the way to the heavenly home. [Refrain]

[O dark was the night and cold blew the wind]

All tunes published with 'O Dark Was The Night'^ top