Victory Over the Fears of Death 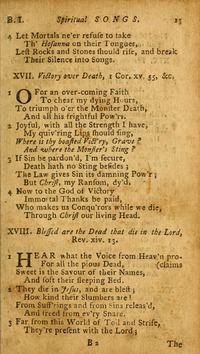 O for an overcoming faith

O for an overcoming faith
To cheer my dying hours;
To triumph o'er the monster Death,
And all his frightful powers!


Joyful with all the strength I have
My quiv'ring lips should sing-
Where is thy boasted vict'ry, Grave?
And where the monster's sting?


If sin be pardoned, I'm secure,
Death hath no sting beside;
The law gives sin its damning power;
But Christ, my ransom, died.


Now to the God of victory
Immortal thanks be paid,
Who makes us conquerors while we die,
Through Christ our living head.

O for an overcoming faith. J. Watts. [Second Advent]. First published in his Hymns and Spiritual Songs, 1707 (2nd edition 1709, Book i. 17), in 4 stanzas of 4 lines. It is based on 1 Cor. xv. 55-58, and in included in several hymn-books in Great Britain and America.
Another form is that given to it as No. 41 in the Draft Scottish Translations and Paraphrases, 1745, beginning, "When the last trumpet's awful voice." It is in 7 stanzas of 4 lines, of which i.-iii. and vii. are new, and stanzas iv.-vi. are stanzas ii.-iv. of this hymn by Watts. It was rewritten in the public worship edition of the Translations and Paraphrses, issued by the Church of Scotland in 1781 and still in common use; stanza iii., 11. 3, 4, being altered from the 1745 text, and stanza vii. rewritten as stanzas vii. and viii. The text of 1745 is ascribed by the eldest daughter of W. Cameron to Thomas Randall (an opinion not shared in by the other authorities); and the alterations in 1781 to W. Cameron. This form of the text is in common use outside of the Trs. and Paraphrases, both in Great Britain and America. Sometimes stanzas iii.—vi. are slightly altered as, "Behold what heavenly prophets sung." This form is in the Edinburgh Diocesan Selection of 1830, No. 23, and again in the Scottish Episcopal Collection, 1858, No. 126. [Rev. James Mearns, M.A.]

All tunes published with 'Victory Over the Fears of Death'^ top 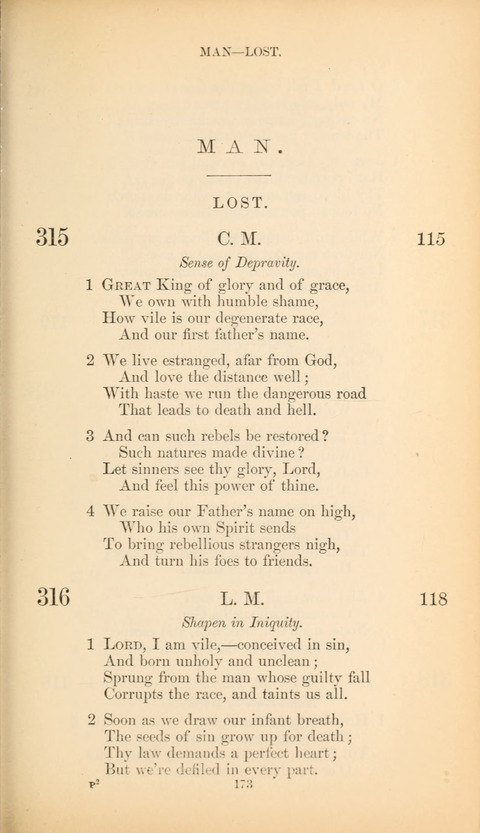 A Baptist Hymn Book, Designed Especially for the Regular Baptist Church and All Lovers of Truth #d564

A Choice Selection of Psalms, Hymns and Spiritual Songs for the use of Christians #548

Display Title: Victory over the fears of death First Line: O for an overcoming faith Meter: C. M. Date: 1872 Subject: Time and Eternity | Death and Resurrection
A Collection of Hymns for the use of the African Methodist Episcopal Zion Church in America #1074

A Collection of Hymns, for the use of the United Brethren in Christ #954

A Collection of Psalms and Hymns for Christian Worship. (45th ed.) #608

A Collection of Psalms and Hymns for Christian Worship. 16th ed. #608

A Collection of Psalms, Hymns and Spiritual Songs; suited to the various kinds of Christian worship; and especially designed for and adapted to the Fraternity of the Brethren... #479

A Collection of Spiritual Hymns #348

A Manual of Devotion and Hymns for the House of Refuge, City of New York #241

A Manual of Devotion for Soldiers and Sailors #84

A New and Choice Selection of Hymns and Spiritual Songs for the Use of the Regular Baptist Church. 10th ed. #d367

A New Selection of Psalms and Hymns from the Most Approved Authors, Adapted to Public and Private Worship. 2nd ed. #d370

A Pastor's Selection of Hymns and Tunes #484

A Selection of Hymns and Psalms for Social and Private Worship (2nd ed. Enl. and Imp.) #278

A Selection of Hymns and Psalms for Social and Private Worship (6th ed.) #287

A Selection of Hymns and Psalms, for Social and Private Worship. (11th ed.) #287

A Selection of Hymns and Psalms #278

A Selection of Hymns for the Use of Church of England Sunday Schools, Bible Classes ... New ed. #d212

A Selection of Spiritual Songs #950

Additional Hymns, Adopted by the General Synod of the Reformed Protestant Dutch Church in North America, at their Session, June 1846, and authorized to be used in the churches under their care #308

Book of Hymns and Tunes, comprising the psalms and hymns for the worship of God, approved by the general assembly of 1866, arranged with appropriate tunes... by authority of the assembly of 1873 #115c

Christian Hymn and Tune Book, for use in Churches, and for Social and Family Devotions #614

Christian's Duty, exhibited in a series of hymns #216

Church Pastorals, hymns and tunes for public and social worship #904

Congregational Hymn and Tune Book; containing the Psalms and Hymns of the General Association of Connecticut, adapted to Suitable Tunes #512

Hymnal of the Methodist Episcopal Church #985

Hymnal of the Methodist Episcopal Church #985

Hymnal of the Presbyterian Church #285

Hymns and Spiritual Songs, Original and Selected, for the Use of Christians. (5th ed.) #7

Hymns and Spiritual Songs, Original and Selected, for the Use of Christians. (8th ed.) #7

Hymns for Social Worship, Compiled for the Use of Canadian Baptist Churches #d207

Hymns for the Sanctuary and Social Worship #1075

Hymns for the Sick-Room #91

Hymns for the Use of the Brethren in Christ #d334

Hymns for the Use of the Methodist Episcopal Church. Rev. ed. #1074

Hymns for Youth, Suitable to be Used in Sabbath and Parochial Schools #401

Hymns, Psalms, and Spiritual Songs, including Some Never Before in Print #d232

Melodies of the Church #d729

Psalms and Hymns Adapted to Public Worship, and Approved by the General Assembly of the Presbyterian Church in the United States of America #H12

Psalms and Hymns Adapted to Social, Private and Public Worship in the Presbyterian Church in the U.S.A. #d609

Psalms and Hymns and Spiritual Songs #1180

Psalms and Hymns for the Worship of God #d568

Psalms and Hymns of Isaac Watts, The #I.17

Psalms and Hymns, for Christian Use and Worship #H483

Psalms and Hymns, for Social and Private Worship #d321

Selection from Tate and Brady's Version of the Psalms; with Hymns by Various Authors, for the Church in Brattle-Square #d193

Songs for the Sanctuary, or Hymns and Tunes for Christian Worship #ad770

Songs for the Sanctuary, or Hymns and Tunes for Christian Worship #b1197

Songs for the Sanctuary; or Psalms and Hymns for Christian Worship (Baptist Ed.) #1197

Songs for the Sanctuary; or, Psalms and Hymns for Christian Worship (Words only) #1197