O how the thought that I should know 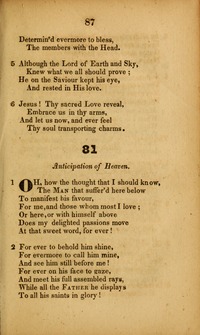 O how the thought that I should know

Swaine, Edward, born at London, Sep. 21, 1795. He was for about 40 years a deacon of Craven Chapel (Congregational) under the pastorate of Dr. Leifchild and others; one of the directors of the London Missionary Society, and founder and chairman of the Pastors' Insurance Aid Society. He died April 22, 1862. (Miller's Singers and Songs, 1869, p. 441.) Mr. Swaine wrote several tracts, and also printed for private circulation The Hand of God, A Fragment, with Poems, Hymns, and Versions of Psalms, 1889. His hymns, "Hail! blessed communion of love" (Holy Communion), and "Lord Jesus, let Thy watchful care" (For Emigrants), were written in 1855 for the New Congregational Hymn Book, and given therein, 1859. -- John Julian, Dictionary of Hymnology… Go to person page >
^ top

O how the thought that we shall know. E. Swaine. [Heaven Anticipated.] The original publication of this hymn we are unable to determine. It probably appeared in a religious magazine, circa 1830: for stanzas ii.-v. were given in Bickersteth's Christian Psalmody. 1833, No. 575: as "For ever to behold Him shine." The original was republished in Swaine's The Hand of God, a Fragment, with Poems, Hymns, and Versions of Psalms, 1839: Bickersteth's arrangement was also repeated in several collections. In 1876 Bp. E. H. Bickersteth wrote a new stanza, substituted it for Swaine's original, and gave the hymn in his Hymnal Companion as "‘For ever' beatific word," together with an elaborate note in which he says it was strange to begin the hymn as his father had done, with the second stanza of the original, "For ever to behold Him shine,"

"without the sacred name of Jesus being previously expressed, and without the keynote, ‘For ever,' being clearly struck, as in the original, at the close of the first verse. It is probably owing to this fact that so beautiful a hymn has been omitted from many of the standard hymnals of the Church. The editor therefore ventured, though with much diffidence, to write the first verse given in the text [as in Hymnal Companion]: for the closing of the first and last stanzas with the same word 'For ever’ as originally contrived by the author, seems almost essential to the full chord of eternity, which is struck again and again in this admirable hymn." (Notes, Hymnal Companion. No. 240.)

This arrangement by Bishop Bickersteth has produced a very attractive and melodious hymn. 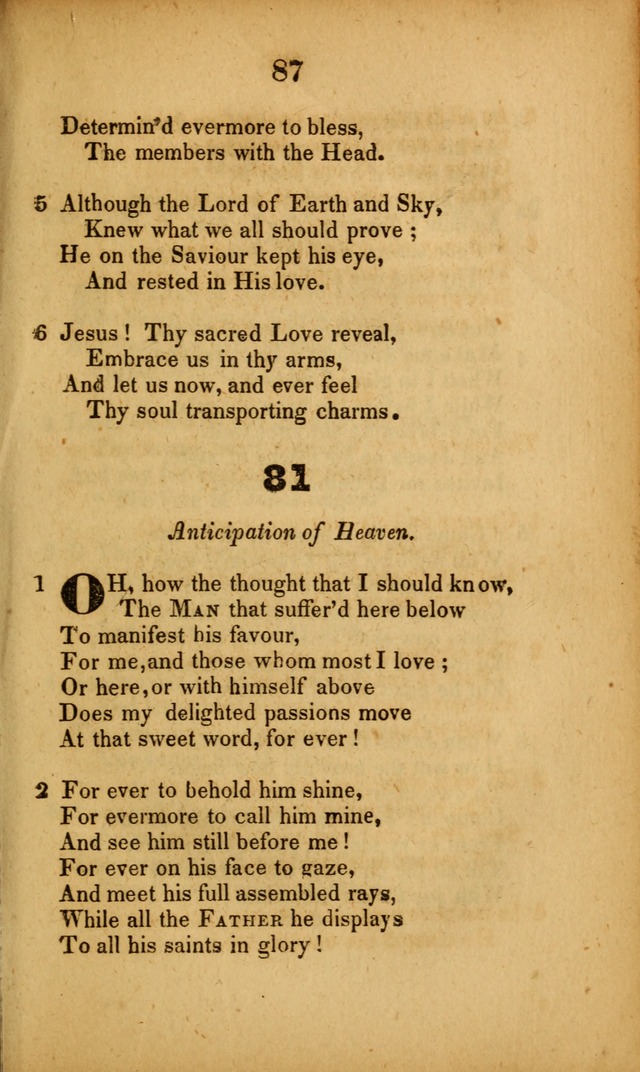 View Page
A Collection of Hymns, intended for the use of the citizens of Zion, whose privilege it is to sing the high praises of God, while passing through the wilderness, to their glorious inheritance above. (1835), p.87
^ top

A Collection of Hymns, intended for the use of the citizens of Zion, whose privilege it is to sing the high praises of God, while passing through the wilderness, to their glorious inheritance above. #81