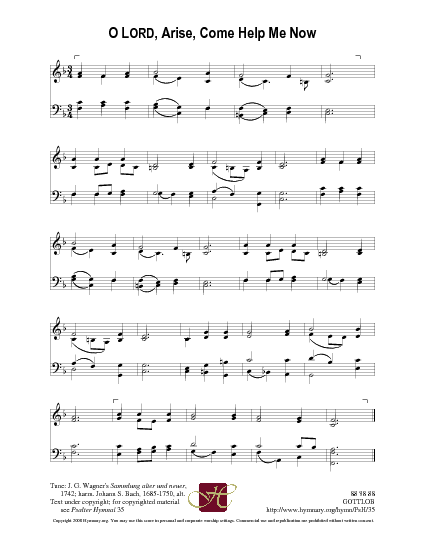 Helen Ann (Brink) Otte Walter (b. Grand Rapids, MI, 1931) versified this psalm in 1982 for the Psalter Hymnal. She received her education at Calvin College, Grand Rapids, Michigan, and has worked as a teacher, proofreader, and librarian. She was a member of the Poets' Workshop that worked with the revision committee to prepare psalm versifications for the 1987 Psalter Hymnal. After her first husband died and she remarried, she remained active as a freelance writer, especially of children's stories and dramas, some of which have been published in Reformed Worship under the name Helen Walter. Bert Polman Go to person page >
^ top

A king's prayer for deliverance from the Plots of false friends, who have turned against him in his time of trouble.

This psalm appears to be a prayer of the LORD's anointed ("his servant," v. 27) and evokes a situation similar to that in other psalm prayers (25, 41): when the psalmist is brought low through trouble ("when I stumbled," v. 15), those whom he has viewed as friends and associates plot to destroy him, using the weapons of slander and false accusation. Unable to defend himself against such treachery, and having no other court of appeal, the king presents his case to his heavenly King. Appropriately in such an appeal, the anointed pleads that the LORD will both vindicate him (st. 1) and turn the plots of his enemies back upon them (st. 2). A vow to praise his heavenly Deliverer accompanies this appeal (st. 3). The treachery of the psalmist's enemies is such that they falsely accuse him even though he cared and prayed for them when they were ill (st. 4). The psalmist renews his appeal for God's judgment and again vows to praise the LORD, promising thankful rejoicing "amid the crowds of worshipers" (st. 5-6). Helen Otte (PHH 17) versified this psalm of lament in 1985 for the Psalter Hymnal.

Liturgical Use:
Occasions of personal distress or times when the Christian church is under attack. Stanzas 1, 2, and 3 or stanzas 1, 5, and 6 work well as alternatives to the entire psalm in voicing an appeal for God's vindication against slander or false accusation.

Various forms of GOTTLOB are found in a number of collections of old German melodies. One form of the tune appeared in Johann G. Wagner's Sammlung alter und neuer (1742) with the burial hymn "Gottlob, es geht nunmehr zum Ende" ("Thanks Be to God; My End Is Near Me"). Although only the first line of…