O Lord, how happy is the time 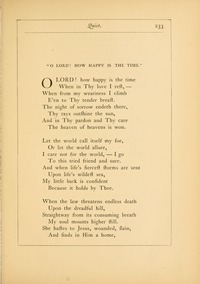 O Lord, how happy is the time

1 O Lord! how happy is the time,
When in Thy love I rest,
When from my weariness I climb
E'en to Thy tender breast.
The night of sorrow endeth there,
The rays outshine the sun,
And in Thy pardon, and Thy care,
The heav'n of heav'ns is won.


2 The world may call itself my foe,
Or let the world allure,
I care not for the world, I go
To this tried Friend and sure.
And when life's fiercest storms are sent,
Upon life's wildest sea,
My little bark is confident,
Because it holds by Thee.


3 When the law threatens endless death,
Upon the dreadful hill,
Straightway from its consuming breath
My soul mounts higher still;
It hastes to Jesus, wounded, slain,
And finds in Him its home,
Whence it shall not go forth again,
And where no death can come.


4 I do not fear the wilderness,
Where Thou hast been before;
Nay! rather would I daily press
Toward Thee, and near Thee more!
Thou art my strength, on Thee I lean,
My heart Thou makest sing,
And to Thy pastures rich and green
Thy chosen flock wilt bring.


5 And if the gate that opens there
Be closed to other men,
It is not closed to those who share
The heart of Jesus then.
That is not losing much of life,
Which is not losing thee,
Who art as present in the strife,
As in the victory!

"This hymn dates from the period when Dessler as a youth was residing in his native town of Nürnberg in ill health. He had given up the occupation of goldsmith and set himself to study at Altdorf, but lack of money and of health compelled him to abandon this also. He then maintained himself as a proof reader in his native town, became the spiritual son and scholar in poesy of Erasmus Francisci, in whose powerful faith he found nourishment in his sorrows. Through his linguistic attainments, as well as through his hymns, he furthered the edification of the Christian populace; and what he here sung may have afforded stimulus to himself in the still greater troubles which he afterwards had to endure during his conrectorship, and finally in his last thirty-five weeks illness."

"One of the finest hymns of Pietism, that has produced many blessed effects, and has been the model and incitement to many hymns of like character."

All tunes published with 'O Lord, how happy is the time'^ top 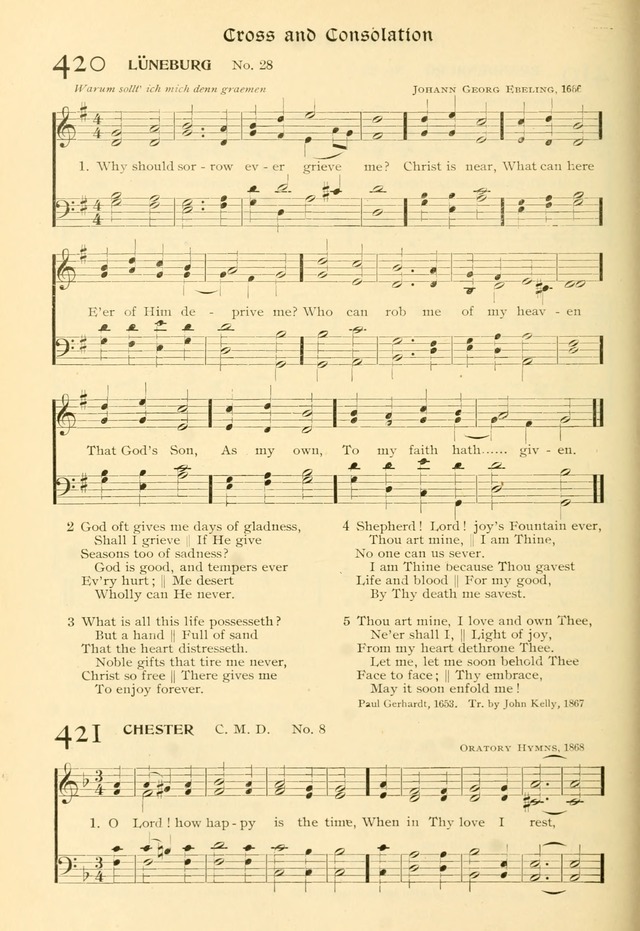 Carmina Sanctorum, a selection of hymns and songs of praise with tunes #383

Hymns for the Sick-Room #70