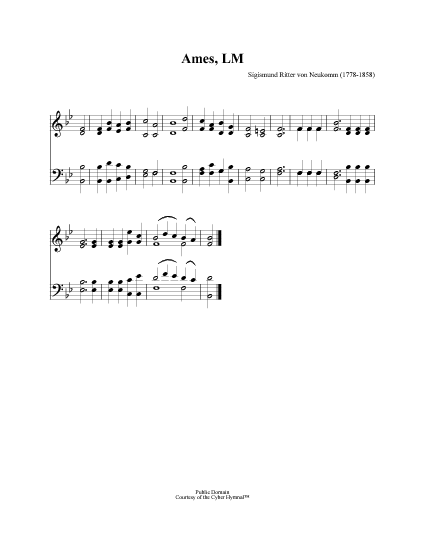 1 O Lord, thy heavenly grace impart,
And fix my frail, inconstant heart!
Henceforth my chief desire shall be
To dedicate myself to thee.


2 Whate’er pursuits my time employ,
One thought shall fill my soul with joy:
That silent, secret thought shall be
That all my hopes are fixed on thee.


3 Thy glorious eye pervadeth space;
Thou’rt present, Lord, in every place;
And wheresoe’er my lot may be,
Still shall my spirit cleave to thee.


4 Renouncing every worldly thing,
Safe ‘neath the shelter of thy wing,
My sweetest thought henceforth shall be
That all I want I find in thee.


Source: The Song Book of the Salvation Army #517

O Lord, Thy heavenly grace impart. [Self Consecration.] This hymn is found in Mrs. Lucy Wilson's Memoirs of John Frederic Oberlin. London, 1829, p. 254. It is there printed as part of the account of a service in Waldbach church on June 11, 1820, the description being given from the journal of Mrs. Steinkopff, who, with her husband, Dr. Steinkopff, secretary of the British and Foreign Bible Society, was then visiting the Ban de la Roche. After describing the service, and the sermon on Isaiah liii. 11, she adds:—

"When he had finished, he read some verses of a hymn expressive of entire devotedness to God. 'My dear friends,' said he, ‘may these be the feelings of our hearts, and as such let us sing them.' They then sang them de bon coeur. The following is a translation:—

"0 Lord, Thy heavenly grace impart,
And fix my frail inconstant heart;
Henceforth my chief desire shall be,
To dedicate myself to Thee!
To Thee, my God, to Thee!"

Then follow three other stanzas.
Fifty years later the Rev. Daniel Wilson, Vicar of Islington, in a letter of Sept. 15, 1870, to the Rev. James Bonar, of Greenock, regarding this hymn of his wife's, remarked:--


"It was written originally by Oberlin in German. Mrs. Wilson wrote Oberlin's Life. Mr. Steinkopff I think first translated it into English, and then Mrs. Wilson put it into verse."

In the Life however there is nothing to show that the hymn was of Oberlin's own composition. Moreover at p. 257 it is said that the Sunday cervices at Waldbach were in French, and that the German service was on Friday. As it happens June 11, 1820, was a Sunday, and there is no reason to suppose that the custom was broken, or that either the service as a whole, or this hymn in particular, was in German. No German hymn at all resembling it has yet been discovered. It is indeed true that in Oberlin's Schriften, vol. i., Stuttgart, 1843, p. 242, there is a German hymn, the first stanza of which is:—

The hymn, however, like the rest of the Leben, is simply a tr. from the English Life by Mrs. Wilson, and is not an original German hymn.
We have also failed to find a French original, either in Oberlin's hymnbook, or elsewhere. Still Mrs. Steinkopff’s account, given above, makes it beyond doubt that Mrs. Wilson's English hymn does in some way reproduce (probably very freely) a hymn used at Waldbach, and makes it almost certain that the hymn was in French, but gives no clue to its authorship.
Mrs. Wilson's hymn has enjoyed considerable popularity, and has generally been given in full and unaltered, as in Thring's Collection, 1880-82, and the Free Church Hymn Book, 1882. In H. V. Elliott's Psalms & Hymns, 1835, it was reduced to L. M., and so in the American Sabbath Hymn Book, 1858, and others in America. Further altered versions are:—
1. Jesus, Thy heavenly grace impart. In Bickersteth's Christian Psalmody, 1833, and others.
2. 0 God, Thy heavenly grace impart. In the Hymns for Holy Trinity, Westminster, 1854, No. 78.
[Rev. James Mearns, M.A.]

All tunes published with 'Thy Grace Impart'^ top 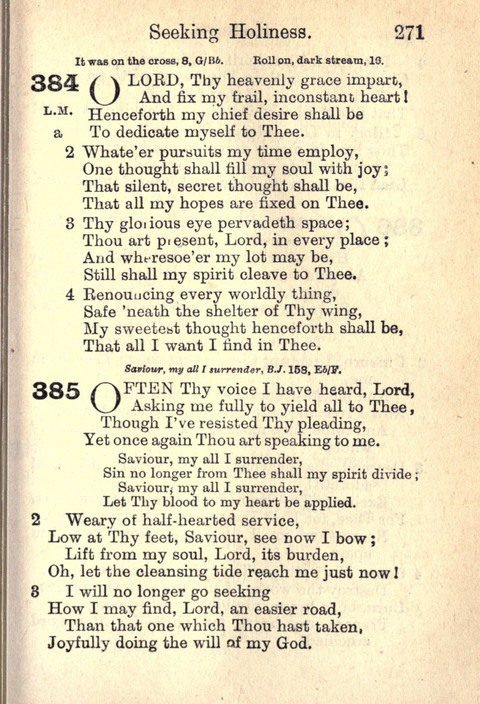 The Song Book of the Salvation Army #517