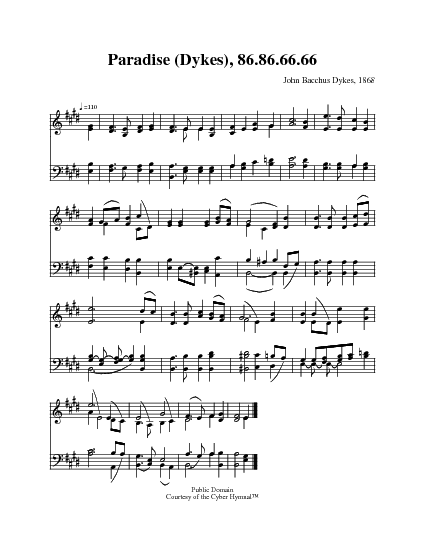 1 O Paradise, O Paradise,
Who doth not crave for rest?
Who would not seek the happy land
Where they that loved are blest:


Refrain:
Where loyal hearts and true
Stand ever in the light,
All rapture, through and through,
In God's most holy sight. A-men.


2 O Paradise, O Paradise,
The world is growing old;
Who would not be at rest and free
Where love is never cold? [Refrain]


4 O Paradise, O Paradise,
We shall not wait for long;
E'en now the loving ear may catch
Faint fragments of thy song: [Refrain]


5 Lord Jesus, King of Paradise,
O keep us in thy love,
And guide us to that happy land
Of perfect rest above: [Refrain]


Source: Service Book and Hymnal of the Lutheran Church in America #589

O Paradise, O Paradise. F. W. Faber. [Heaven.] First published in his Hymns, 1862, in 7 stanzas of 8 lines, and entitled "Paradise." In 1868 it was included in the Appendix to Hymns Ancient & Modern, with the omission of stanzas iii. and vii., and the addition of the stanza “Lord Jesus, King of Paradise," by the compilers. For some time after the hymn was included in Hymns Ancient & Modern it was very popular, Dr. Dykes's tune therein being the chief cause of its success. Latterly, however, its unreality, and, in its original form, its longing for sudden death, has caused it to be omitted from several of the best collections. The rewritten version, in three stanzas, in Morrell & How's enlarged edition of their Psalms & Hymns, 1864-67, No. 165, is a failure.

All tunes published with 'O Paradise! O Paradise! Who doth not crave for rest?'^ top 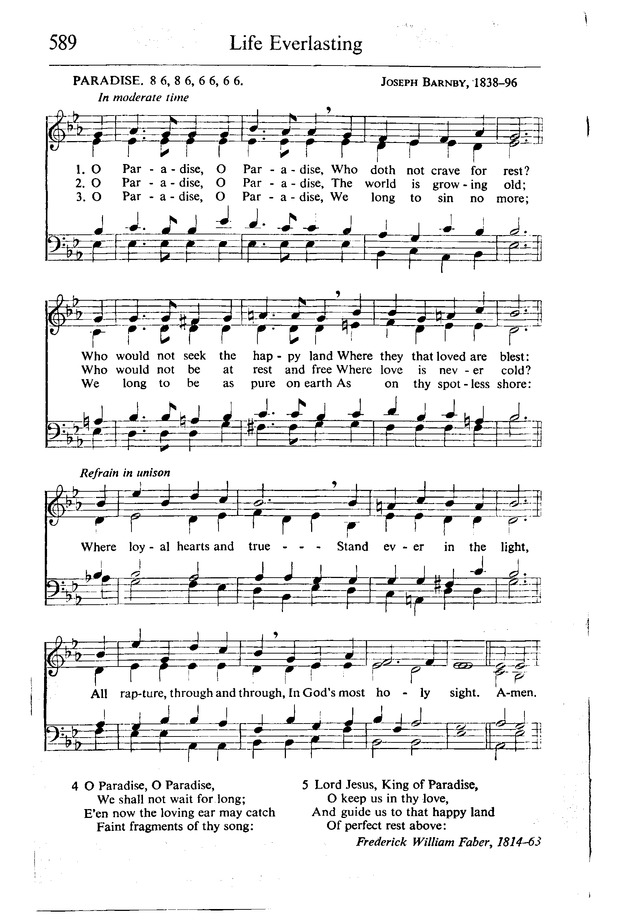