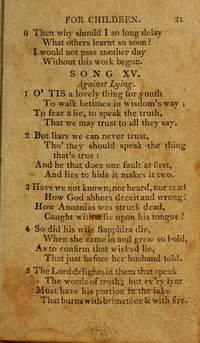 O ‘tis a lovely thing for youth
To walk betimes in wisdom’s way;
To fear a lie, to speak the truth,
That we may trust to all they say!

But liars we can never trust,
Though they should speak the thing that’s true;
And he that does one fault at first,
And lies to hide it, makes it two.

Have we not known, nor heard, nor read
How God abhors deceit and wrong?
How Ananias was struck dead,
Caught with a lie upon his tongue?

56
So did his wife Sapphira die,
When she came in, and grew so bold
As to confirm that wicked lie,
Which just before her husband told.

The Lord delights in them that speak
The words of truth; but every liar
Must have his portion in the lake
That burns with brimstone and with fire.

Then let me always watch my lips,
Lest I be struck to death and hell,
Since God a book of reckoning keeps
For every lie that children tell.

Source: Divine and Moral Songs: attempted in easy language for the use of children with some additional composures #HXV 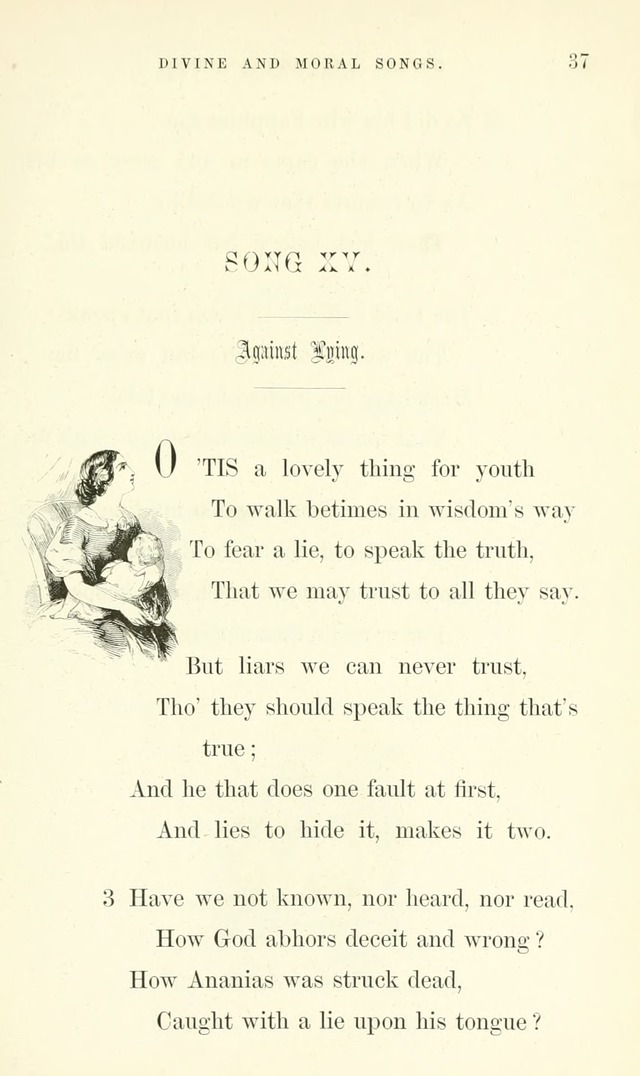 View Page
Divine and Moral Songs: attempted in easy language for the use of children with some additional composures (1866), p.39
^ top

A Collection of Psalms and Hymns #378

A Selection of Hymns for the Use of Church of England Sunday Schools, Bible Classes ... New ed. #d224

Hymns for Schools and Families #d369

Hymns for Schools and Families, Specailly Designed for the Children of the Church #323

Hymns for Youth, Suitable to be Used in Sabbath and Parochial Schools #244

Hymns, Selected and Arranged for the Sunday School of the Evangelical Lutheran Church of St. Matthew, Philadelphia #d137

Hymns, Selected and Original, for Sunday Schools of the Evangelical Lutheran Church #d333

Sabbath School and Social Hymns of the Reformed Protestant Dutch Church of the U.S.A. #d197

The Child's Pocket Companion, Being a Selection of Choice Hymns for Sabbath School, with an Analysis to Most of Them #d47

Watt's Divine Songs For the use of Children #15