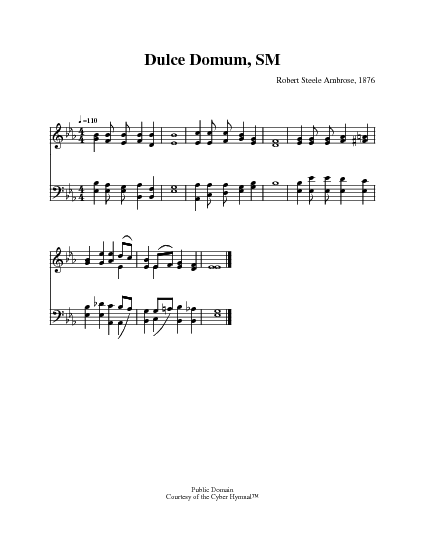 1 One sweetly solemn tho't
Comes to me o'er and o'er,
I'm nearer home today
Than I have been before.


2 Nearer my Father's house,
Where many mansions be;
Nearer the great white throne,
Nearer the crystal sea. [Refrain]


3 For even now my feet
May stand upon its brink;
I may be nearer home,
Nearer than now I think. [Refrain]


4 O let me ready be
Whene'er the call shall come
To bid the world farewell
And gladly leave for home. [Refrain]


5 My heart is over there,
I often long for rest,
And there to join my voice
With all the pure and blest. [Refrain] 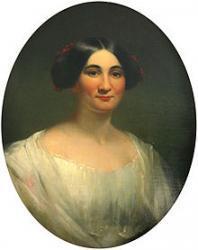 Phoebe Cary, (1824-1871) was born and raised in Mount Healthy in Hamilton County, Ohio. Her family came from Lyme, New Hampshire to Ohio when her grandfather was given land in return for his service in the Continental Army. She was the younger sister of Alice Cary (1820-1871). She and Alice submitted poetry to religious periodicals. Phoebe remained in Ohio and continued to write many hymns, including, "One sweetly solemn thought." Mary Louise VanDyke… Go to person page >
^ top

One sweetly solemn thought. Anticipation of Heaven. This piece was not intended for public use, nor is it a suitable metre for musical treatment, yet it has won universal acceptance and popularity. In some instances this has been attained by change of metre as in the Supplement to the Baptist Psalms & Hymns 1880, No. 1185. Johnson's Encyclopedia is in error in saying it was "written at the age of 17." The Congregational Quarterly for Oct., 1874, says, "it was written, she tells us, in the little back third story bedroom, one Sabbath morning in 1852, on her return from church." This statement shows that it was composed when she was 28, and not 17. The popularity of the hymn in Great Britain arose mainly through its use in the Evangelistic services of Messrs. Moody and Sankey. In the Protestant Episcopal Hymns for Church and Home, Phila., 1860, No. 383, it is given as "A sweetly solemn thought." [Rev. F. M. Bird, M.A.]

All tunes published with 'One Sweetly Solemn Thought'^ top 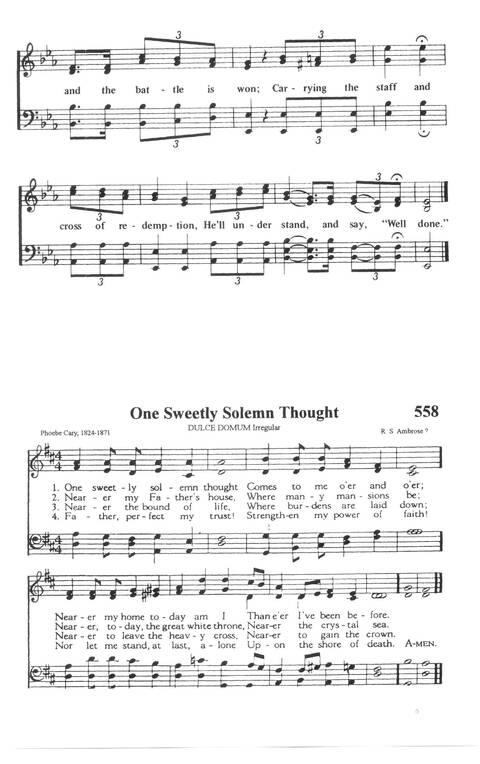