Out of the Depths I Cry, LORD 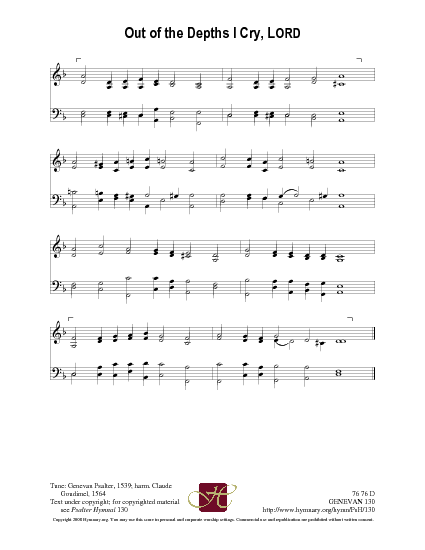 Out of the depths I cry, LORD

A cry from the depths, and a profession of confidence in God's gracious forgiveness and help.

One of the fifteen "Songs of Ascents" (120-134) the Israelites sang as they went up to worship at the temple in Jerusalem, Psalm 130 may have been composed for worshipers who came to the temple to pray when suffering affliction (the "depths" referred to in v. 1). These suffering worshipers acknowledge that their deepest need is for God's forgiveness, but that is also their hope and assurance, for the LORD forgives the sins of the people (st. 1). In that confidence, they eagerly "wait for the LORD" to be gracious and to deliver them from their trouble. And to all God's people they say, "Hope in the LORD, for . . . with him is full redemption" (v. 7; st. 2). In early Christian liturgy Psalm 130 was designated as one of the seven penitential psalms (the others are 6, 32, 38, 51, 102, and 143).

Educated at Calvin College, Grand Rapids, Michigan, and the University of Michigan, Ann Arbor, Swets served as choir director in several Reformed and Christian Reformed congregations in the Grand Rapids area. Swets has published Sixteen Sonnets (1975) and a number of other poems.

Liturgical Use:
Like the other penitential psalms, 130 is most useful in the service of confession/forgiveness of sin. It is particularly appropriate for Lent. See further comment at PHH 131.

GENEVAN 130 was first published in the 1539 edition of the Genevan Psalter. The 1564 harmonization by Claude Goudimel (PHH 6) originally placed the melody in the tenor. GENEVAN 130 is a Dorian tune consisting of four long lines in which the rhythm of line 3 is a fitting contrast to the repeated rhyt…

All tunes published with 'Out of the Depths I Cry, LORD'^ top