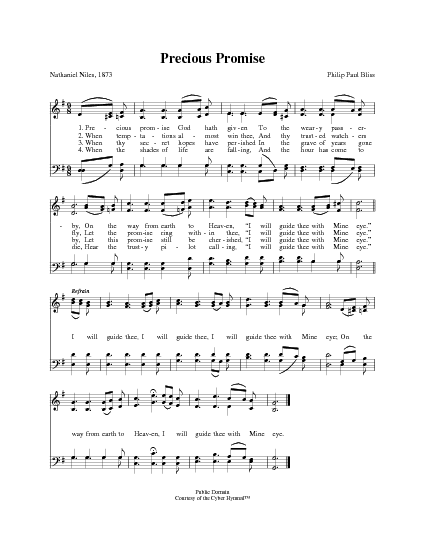 1 Precious promise God has given
To the weary passerby,
On the way from earth to Heaven,
“I will guide thee with Mine eye.”


2 When temptations almost win thee
And thy trusted watchers fly,
Let this promise ring within thee,
“I will guide thee with Mine eye.” (Refrain)


3 When thy secret hopes have perished
In the grave of years gone by,
Let this promise still be cherished,
“I will guide thee with Mine eye.” (Refrain)


4 When the shades of life are falling
And the hour has come to die,
Hear thy trusty Pilot calling,
“I will guide thee with Mine eye.” (Refrain)


Source: Worship and Service Hymnal: For Church, School, and Home #300

Franck Nathaniel Niles USA 1835-1917. Born at South Kingstown, RI, grandson of Rv Nathaniel Niles, he was educated at Philips Andover Academy for the legal profession and admitted to the NY Bar in 1857. He practiced law at Providence, RI and in New York City. In the 1870s he was living in Morristown, NJ. In 1872 he served as speaker of the NJ state assembly. He published a plan in 1868 for the “Construction of a ship canal between the Atlantic and Pacific Oceans, Central America”. In 1879 he became Government Director of the Union Pacific Railroad. He was also made President of Tradesman’s National Bank of New York City. Information found says he and his wife (unnamed) had a son, Alex. His hymn was written while traveling in… Go to person page >
^ top

"This well-known ‘Moody and Sankey' hymn was written by Mr. Nathaniel Niles, a resident of Morristown, New Jersey, and, at that time, a lawyer in New York City. Mr. Niles was born at South Kingston, Rhode Island, September 15th, 1835. He composed these verses on the margin of a newspaper in the railway car while on his way to business."

The hymn was published in The Episcopalian; and again in P. Bliss's Gospel Songs, 1874, with music by Bliss. The text and music in I. D. Sankey's Sacred Songs and Solos, are from the Gospel Song. 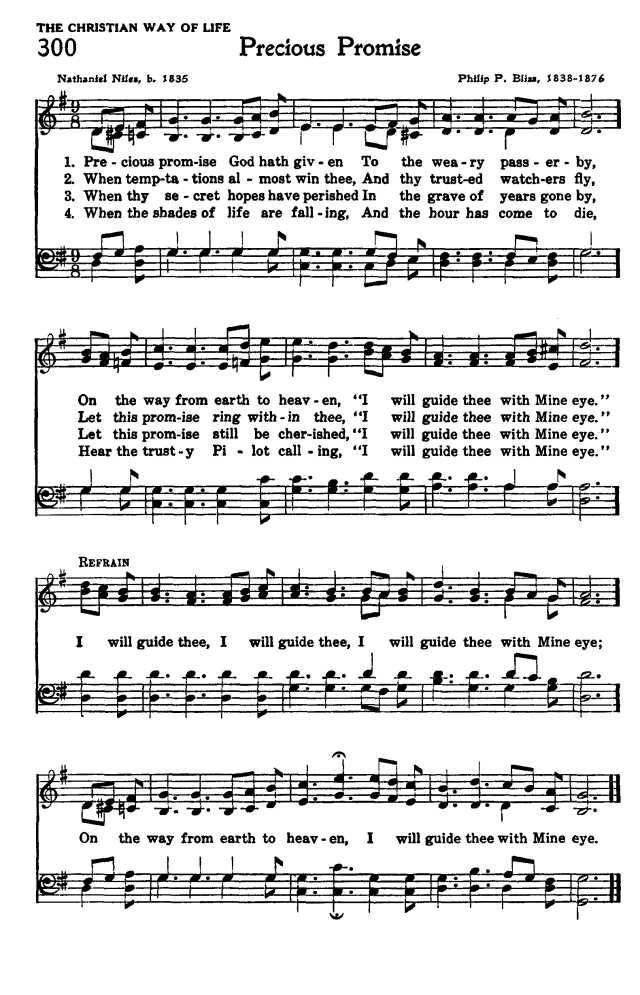 The Song Book of the Salvation Army #753

Display Title: I will guide thee, I will guide thee First Line: Precious promise God hath given Author: Nathaniel Niles (b 1835) Date: 1986 Subject: The salvation soldier | Faith and trust
The Song Book of the Salvation Army #753