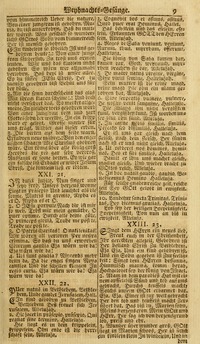 Puer natus in Bethlehem. [Christmas.] A beautiful and simple Christmas carol on the adoration of the Child by the ox and ass, and the visit to Him by the Magi—-so equally appropriate for the Epiphany. It became a great favourite in Germany, and is found in many varying forms. The oldest text known is given by G. M. Dreves, in his Cantiones Bohemica, 1886, No. 178, from a Benedictine Processional of the beginning of the 14th century, formerly belonging to the monastery of St. Georg at Hradisch, near Olmütz, and now in the University Library at Prag. Here it has 9 stanzas viz.:—

These intercalated stanzas seem to be of later origin (if not Post-Reformation), and to have been added to give the hymn a more theological ring. The text of 1545 is in Daniel, i., No. 480; and also in Trench ed. 1864, with the stanza" Intrantes domum invicem " added. Translated as:—

1. The Child is born in Bethlehem. By Elizabeth Charles, in her Voice of Christian Life in Song, 1858, p. 173, in 11 stanzas of 2 lines. When repeated in thePeople's Hymnal, 1867, it was slightly altered, and the refrain “Alleluia" was added to each stanza.
2. Infant born in Bethlehem, Born to save Jerusalem. Anonymous in Mrs. Carey Brock's Children's Hymn Book, 1881.

This hymn has been very frequently translated into German, the versions ranging from that by Heinrich of Laufenberg in 1439 down to recent times. The version in German Protestant hymnbooks is generally that in V. Babst's Gesang-Buch, 1545, which begins, "Ein Kind geborn zu Bethlehem," and is in 10 st. of Latin, with interlaced German versions of all save ii. (thence in Wackernagel, ii. p. 701). In later books, e.g. Burg's Gesang-Buch, Breslau, 1746, trs. of st. ii., x., are added, from the text of V. Schumann's Gesang-Buch, Leipzig, 1539. In the Roman Catholic hymnbooks it is found in a great variety of forms, but all, or almost all, beginning "Ein Kind geborn zu Bethlehem." 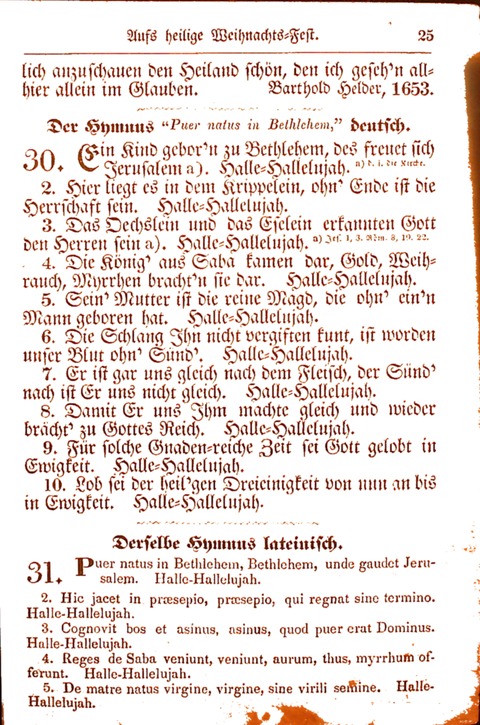 Our Parish Prays and Sings #d55