Refreshed we rise, and for this bread that feeds

Refreshed we rise, and for this bread that feeds,
By law of man's weak flesh, our daily needs,
Let every tongue, the Father's praises sing;
The Father Who on His exalted throne,
O'er Cherubim and Seraphim, alone
Reigns in His majesty, Eternal King.


God of Sabaoth is His name: 'tis He
Who ne'er began and ne'er shall cease to be,
Builder of worlds created at His word;
Fountain of Life that flows from out the sky,
He breathes within us Faith and Purity,
Great Conqueror of Death, Salvation's Lord.


From Him each creature life and vigour gains,
And over all the Eternal Spirit reigns
Who cometh from the Father and the Son:
When, dovelike, on pure hearts the heavenly Guest
Descends, they are by God's own presence blest,
As temples where His holy work is done.


But if the taint of vice or guile arise
Within the consecrated shrine, He flies
With speed from out the sin-defilèd cell;
For, driven forth by guilt's black, surging tide,
The offended Godhead may not there abide
Where conscious sin and noisome foulness dwell.


Not chastity nor childlike faith alone
Build up for Christ an everlasting throne
Deep in the inmost heart, devoid of shame:
But watchful ever must His servants be,
Lest the dark power of sated gluttony
Should bind about the abode of faith its chain.


Yet simple saints, content with frugal fare,
More surely find the Spirit present there,
Who is our soul's true strength and heavenly food:
Thy love for us a twofold feast supplies,
O Father, whence the soul may strengthened rise
And eke the body gain new hardihood.


Thus, fed and sheltered by Thy matchless might,
The lions' hideous roar could not affright
Thy loyal servant in the days of old:
He boldly cursed the molten deity
And stood with stubborn head uplifted high
That scorned to bow before a god of gold.


Then Babylon's vile mob with fury glows;
Death is his doom; and straight the tyrant throws
The youth to be his savage lions' prey:
But faith and piety Thou still dost save,
For lo! the untamed brutes no longer rave,
But round God's unscathed child they gently play.


Close by his side they stand with drooping mane,
The grisly, gaping jaws from blood refrain
And with rough tongues their whilom prey caress:
But when in prayer he raised his hands to heaven
And called the God, from Whom such help was given,
Close-prisoned, hungry, and in sore distress,


A wingèd messenger to earth He sends,
Who swiftly through the parting clouds descends
To feed His servant, proven by the test:
By chance he sees from far the unbought fare
Which the good seer Habakkuk's kindly care
With rustic art had for the reapers dressed:


Then, grasping in strong hand the prophet's hair,
He bears him gently through the rushing air,
Still burdened with the platter's savoury load,
Till o'er the lions' den at last they stayed
And straightway to the starving youth displayed
The food thus brought, by God's good grace bestowed.


"Take this with joy," he said, "and thankful feed,
The bread that in thy hour of direst need,
By the great Father sent, Christ's angel brings."
Then Daniel lifts his eyes to heaven above
And, strengthened by the wondrous gift of love,
"Amen!" he cries, and Alleluia sings.


Thus, therefore, by Thy bounties now restored,
Giver of all things good, Almighty Lord,
We render thanks and sing glad hymns to Thee:
Though prisoned in an evil world we dwell
Where sin's grim tyrant rules, Thou dost repel
With sovran power our mortal enemy.


He roars around us, and would fain devour,
Grinding his angry teeth when 'gainst his power
In Thee alone, O God, we still confide:
By evil things we are beset and vexed,
Tormented, hated, harassed and perplexed,
Our faith by cruel suffering sorely tried,


Yet help ne'er fails us in our time of need,
For Thou canst quell the lions' rage, and feed
Our hungry spirits with celestial fare:
And if some soul no meagre taste would gain
Of that repast, but thirstily is fain
Full measure of the heavenly sweets to share,


He by the holy seers of old is fed,
And shall partake the loyal reapers' bread
Who labour in the eternal Master's field:
For nothing sweeter than the Word can be
That fell from righteous lips, once touched by Thee,
And nought can richer grace to mortals yield.


With this sustained, though vaunting tyranny
By unjust judgment doom us straight to die,
And starvèd lions rush these limbs to tear;
Confessing ever Thine Eternal Son,
With Thee, Almighty Father, ever one,
His cross with faith unshaken will we bear. 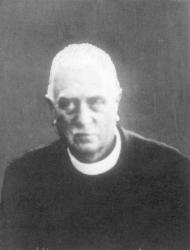 Pope, Robert Martin, M.A., s. of Rev. H. J. Pope, D.D. (ex-President of the Wesleyan Conference), was born in London, Jan. 4, 1865, and was educated at Manchester Grammar School, Victoria Univ., Manchester, and St. John's Coll., Cambridge (B.A. 1887, M.A. 1896). He entered the Wesleyan Ministry in 1888 and is now (1906) stationed at Oxford. He was joint author of The Hymns of Prudentius, translated by R. Martin Pope and R. F. Davis, 1905, being a verse translation of the Cathemerinon of Prudentius with notes. Two of Mr. Pope's versions are in The English Hymnal, 1906, Nos. 54, 55. He also contributed articles on Latin Hymnody, with some original translations, to the London Quarterly Review, July 1905 and Jan. 1906, with a supplemental note… Go to person page >

Hymns of Prudentius translated by R. Martin Pope, The #4E

Display Title: Hymn After Meat First Line: Refreshed we rise, and for this bread that feeds Author: R. Martin Pope; Prudentius Date: 1905
Hymns of Prudentius translated by R. Martin Pope, The #4E
All instances^ top
Suggestions or corrections? Contact us