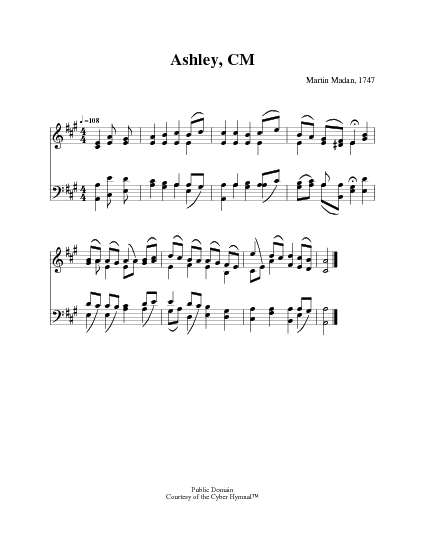 1 Salvation! O the joyful sound!
What pleasure to our ears!
A sovereign balm for every wound,
A cordial for our fears.


2 Salvation! let the echo fly
The spacious earth around,
While all the armies of the sky
Conspire to raise the sound.


3 Salvation! O Thou bleeding Lamb!
To Thee the praise belongs;
Salvation shall inspire our hearts,
And dwell upon our tongues.

Salvation, O the joyful sound. J. Watts. [Praise for Salvation.] The hymn which passes under this first line is found in so many forms that it will be necessary to indicate not only the sources from whence its varying stanzas have been taken, but also to give the original text itself.
i. The original hymn appeared in Watts's Hymns and Spiritual Songs, 1707. Bk. ii.,No. 88, in 3 stanzas of 4lines, and entitled "Salvation ":—

1. "Salvation! O, the joyful sound,
'Tis pleasure to our ears;
A Sov'reign balm for every wound,
A cordial for our fears.
2. "Bury'd in sorrow and in sin,
At hell's dark door we lay;
But we arise by grace divine
To see a heav'nly day.
3. "Salvation! let the echo fly
The spacious earth around,
While all the armies of the sky
Conspire to raise the sound."

Amongst the collections which are in com¬mon use at the present day the following contain this text: the Society for Promoting Christian Knowledge Psalms & Hymns; Book of Praise Hymnal; Baptist Psalms & Hymns; New Congregational Hymn Book; Spurgeon's Our Own Hymn Book; Stevenson's Hymns for Church and Home; and others, which can be readily ascertained by reference to the text as above. It is also found in numerous American collections.
ii: About the year 1772 a cento appeared in the Countess of Huntingdon's Collection as follows:—

St. i. Watts's st. i. as above, with "What" for "'Tis."
St. ii. Watts's st. iii. as above.
St. iii. "Salvation! O Thou bleeding Lamb,
To Thee the praise belongs;
Salvation shall inspire our hearts,
And dwell upon our tongues."

To these were added the following st.:—

" Blessing, honour, praise and power
Be unto the Lamb for ever:
Jesus Christ is our Redeemer,
Hallelujah! Praise the Lord."

This arrangement is probably due to the Hon. Walter Shirley, who revised the Lady Huntingdon Collection about 1774. It was exceedingly popular with the older compilers, and is found in many of their collections. In modern hymn books it is found, amongst others, both in Great Britain and America, in:-—the Wesleyan Hymn Book; Methodist New Congrational Hymn Book; Methodist Sunday School Hymn Book, &c, with the "Blessing" of the chorus changed to "Glory"….
iv. Some curious and somewhat interesting centos are also found in the older collections: as Ash & Evans's Baptist Collection (Bristol), 1769; Urwick's Collection (Dublin), 1829; Bickersteth's Christian Psalmody, 1833; and others. In one form or another, as an original hymn or as a cento, “Salvation! O the joyful sound," has had and still has a most extensive use. It has also been translated into several languages, Sometimes one form of the text being used and then another….

All tunes published with 'Salvation, O the joyful sound!'^ top 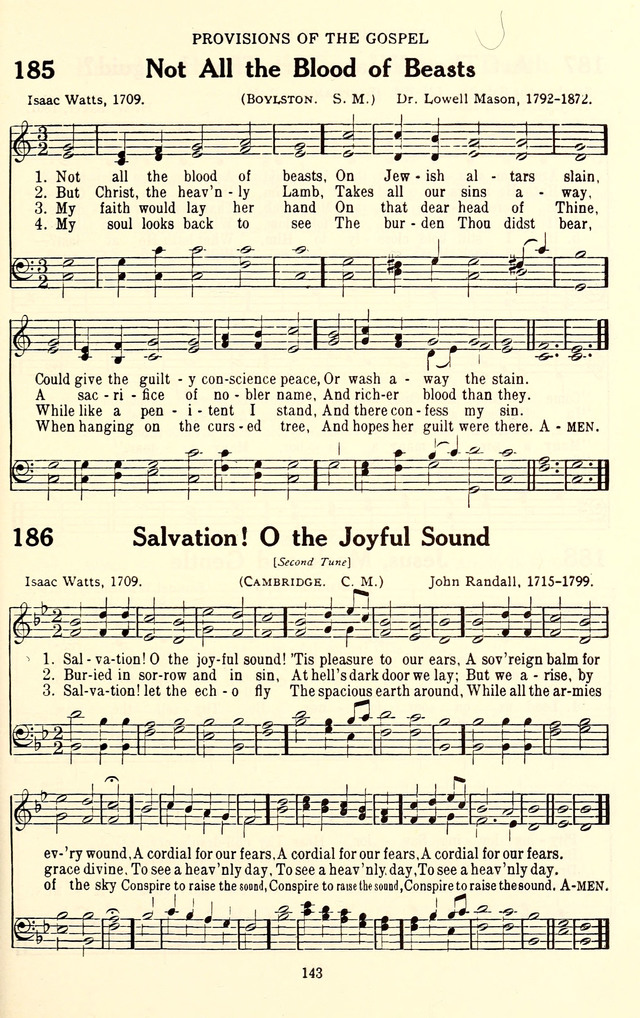 The Christian Harmony #58B

The Sacred Harp #47a

The Song Book of the Salvation Army #382