See from on high, arrayed in truth and grace 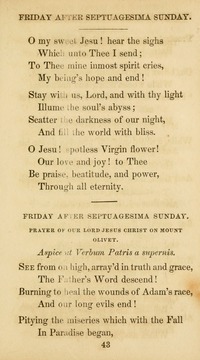 See from on high, arrayed in truth and grace

Aspice ut Verbum Patris a supernis. Anon. [Passiontide.] The only notice of this hymn in Daniel is in the Index at the end of vol. v., thus:—"Orat. Domini in monte Oliveti, Frib." In the Appendix to the Roman Breviary containing the offices said in particular districts and places, not universally, it is the hymn at first and second Vespers, and at Matins, on the Feast of the Prayer of our Lord on Mount Olivet, Tuesday after Septuagesima Sunday. This office has of late years been adopted in England (as well by religious orders as by seculars), and is appointed to be said on the Friday after Septuagesima Sunday (though the Benedictine Order observe it on the Tuesday). [Rev. W. A. Shoults, B.D.]
Translations in common use:—
1. See from on high, arrayed in truth and grace, by E. Caswall, first appeared in his Lyra Catholica 1849, and again in his Hymns & Poems, 1873, p. 33, in 6 stanzas of 4 lines, and entitled, "Prayer of Our Lord on Mount Olivet.” The hymn:—
2. See from on high, the Source of saving Grace, in the Hymnary, 1872, No. 240, is an altered version of Caswall’s translation. 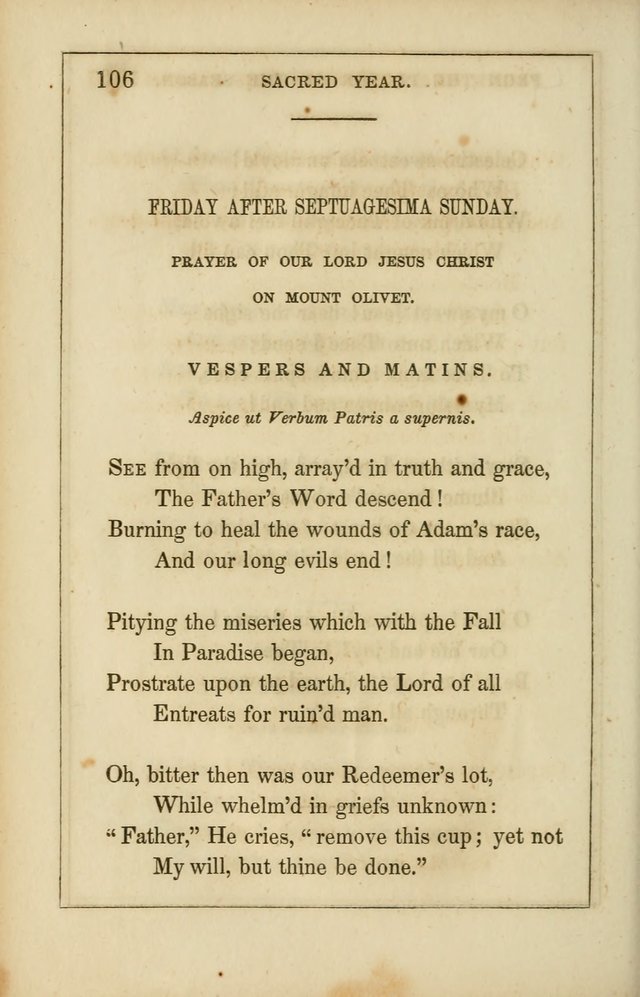 View Page
Lyra Catholica: containing all the hymns of the Roman breviary and missal, with others from various sources. Arranged for every day in the week, and the festivals and saints' days... (1851), p.106
^ top