Should they who have been dearly bought 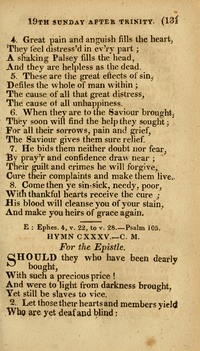 Should they who have been dearly bought

1 Should they who have been dearly bought,
With such a precious price!
And were to light from darkness brought,
Yet still be slaves to vice.


2 Let those their hearts and member yield
Who are yet deaf and blind:
Who never had the truth reveal'd
By an enlight'ned mind.


3 But it should never be the case,
With those who see the light;
Not run in ev'ry dangerous place,
As if they walk'd by night.


4 In such a way they never learn'd,
To know their gracious Lord;
The chief for which they are concern'd,
Is to obey his word.


5 To crucify their lusts and pride,
The old man with his deed:
Their vile affections lay'd aside,
They see there is a need.


6 Then will those vices be subdu'd,
And all such foes suppress'd;
Then is the inward man renew'd,
And made in God to rest?


Source: Church Hymn Book: consisting of newly composed hymns with the addition of hymns and psalms, from other authors, carefully adapted for the use of public worship, and many other occasions (1st ed.) #CXXXV

Church Hymn Book; consisting of hymns and psalms, original and selected. adapted to public worship and many other occasions. 2nd ed. #275