Slavery and death the cup contains 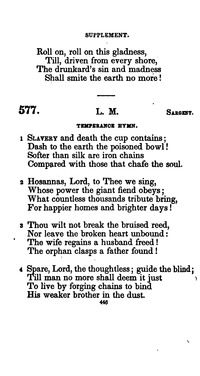 Slavery and death the cup contains

1 Slavery and death the cup contains;
Dash to the earth the poisoned bowl;
Softer than silk are iron chains
Compared with those that chafe the soul.


2 Spare, Lord, the thoughtless, guide the blind,
Till man no more shall deem it just
To live by forging chains to bind
His weaker brother in the dust.

Sargent, Lucius Manlius. (Boston, Massachusetts, June 25, 1786--June 2, 1867, Boston). A layman of independent mans, author of many articles advocating temperance. His temperance hymn beginning "Slavery and death the cup contains" was written during the Washingtonian Temperance Revival and appeared in Adams' and Chapin's Unitarian Hymns for Christian Devotion (Boston, 1846). In the American Methodist Episcopal Hymnal (1878), the first line is altered to read "Bondage and death the cup contains." The hymn is included, with the original wording, in the Universalist Church Harmonies (1895). --Henry Wilder Foote, DNAH Archives Go to person page >
^ top

Slavery and death the cup contains. L. M. Sargent. [Temperance.] Mr. Nutter says in his Hymn Studies, &c, N. Y., 1884, p. 347. "This hymn was written during the Washingtonian Temperance Revival." It appeared in Adams and Chapin's Unitarian Hymns for Christian Devotion, Boston, U.S.A., 1846, No. 793, in 4 stanzas of 4 lines. In the American Methodist Episcopal Hymnal, 1878, it begins "Bondage and death the cup contains." The author, Lucius Manlius Sargent (b. 1788, d. 1867) was an earnest advocate of Temperance, and the author of Temperance Tales, and other works. 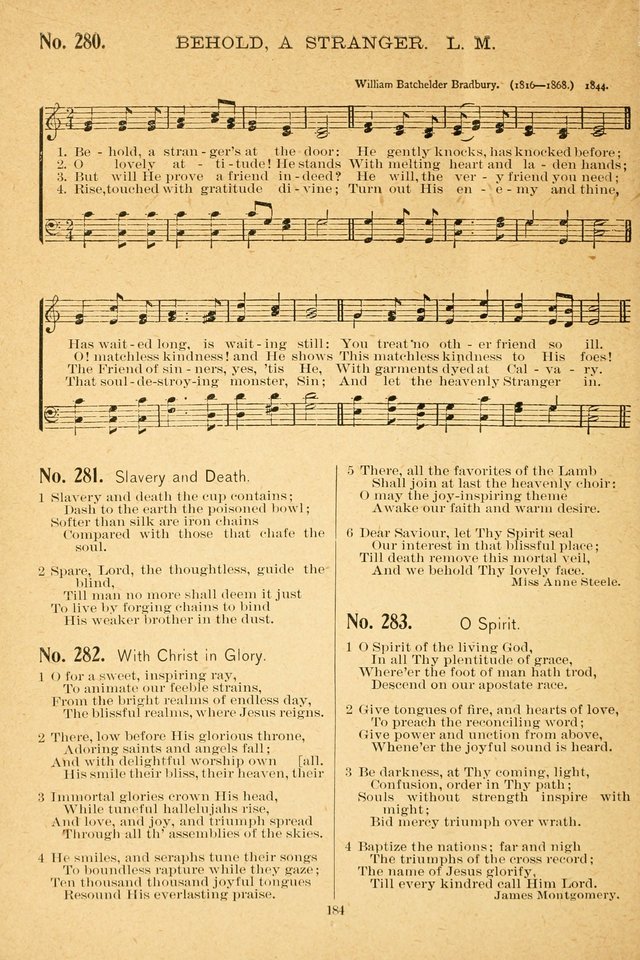 A Collection of Hymns, for the use of the United Brethren in Christ #896

Hymn and Tune Book for the Church and the Home and Services for Congregational Worship. Rev. ed. #d624

Hymns for the Use of the Brethren in Christ #d437

Jubilate Deo, a Book of Hymns and Tunes for Young and Old #d270

Plymouth Collection of Hymns and Tunes; for the use of Christian Congregations #1045