Sons we are, through God's election 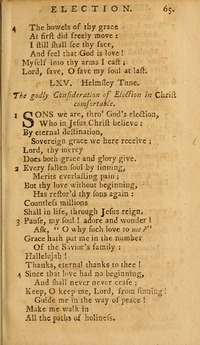 Sons we are, through God's election

Adams, John. (Northampton, England 1751-May 15, 1835, Northampton). Baptist. Apprenticed to an iron monger. At age eighteen, united with Baptist church in Northampton of which John Collett Ryland was pastor. Later excluded from the church because of a change of view. After retiring from business, he moved his residence several times bur subsequently returned to Northampton, where he died. His first hymns were published in the Gospel Magazine in 1776. One hymn ascribed to "S. P. R." in Service of Song but written by Adams begins: Jesus is our great salvation, Worthy of our best esteem! This hymn appearing also in Rippon's Selection of 1813 concerns salvation by election as does one other hymn: Sons we are through God's election.… Go to person page >
^ top

Sons we are through God's election. [Election.] This hymn was given in the Gospel Magazine, April, 1777, in 8 stanzas of 6 lines, based on the words, "’The godly consideration of Predestination and Election in Christ, is full of sweet, pleasant, and unspeakable comfort to godly persons.' — Church of England, Article XVII;" and signed " S. P. K." In J. Dobell's New Selection, 1806, it was repeated, with slight alterations, and the omission of stanzas iii., and given as by " R-----." From the New Selection it has passed into other hymnbooks in the same form. In the S. MSS., the Rev. S. Adams says he believes this hymn to be his father's, but gives no proof, as he has done with others of his father's hymns. The hymn certainly reads like one of Adams's compositions; but his authorship is open to doubt. His usual signature in the Gospel Magazine was "J. A." 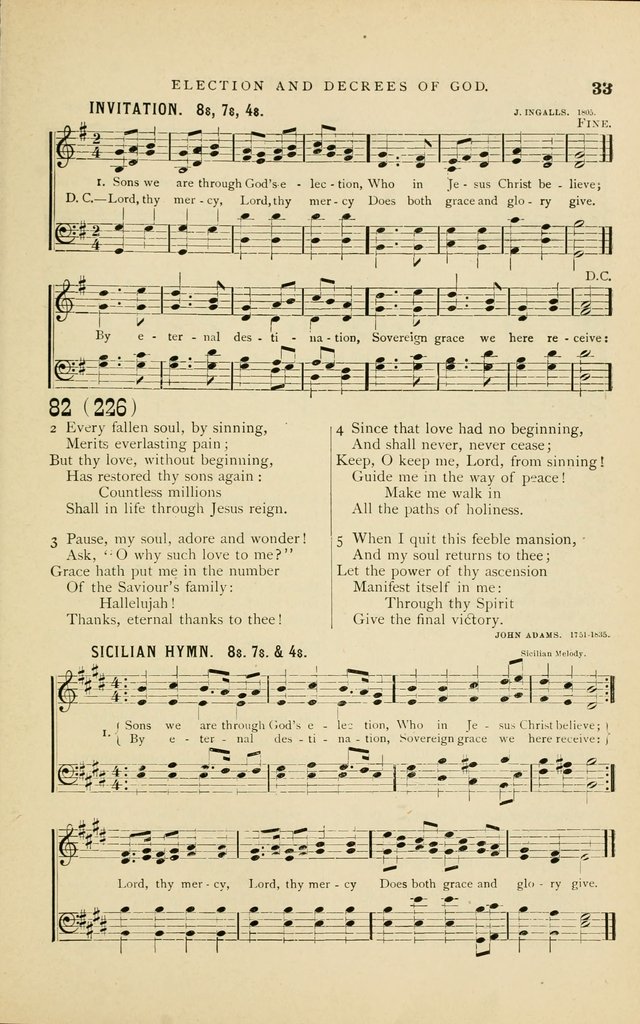 A Baptist Hymn Book, Designed Especially for the Regular Baptist Church and All Lovers of Truth #d664

A New Selection of Hymns; designed for the use of conference meetings, private circles, and congregations, as a supplement to Dr. Watts' Psalms and Hymns #183

A New Selection of Nearly Eight Hundred Evangelical Hymns, from More than 200 Authors in England, Scotland, Ireland, & America, including a great number of originals, alphabetically arranged #277

A New Selection of Psalms, Hymns and Spiritual Songs #53

A New Selection of Seven Hundred Evangelical Hymns ... intended as a Supplement to Dr. Watts's Psalms and Tunes #277

A Selection of Hymns and Spiritual Songs #d190

A Selection of Hymns and Spiritual Songs #S.XXXV

A Selection of Hymns and Spiritual Songs #S.XXXV

A Selection of Hymns from the Best Authors, intended to be an Appendix to Dr. Watts' Psalms & Hymns. 2nd Baltimore ed. #aLXV

A Selection of Hymns from the Best Authors. #65

A Selection of Hymns, from the Best Authors, Designed as a Supplement to Dr. Watts' Psalms and Hymns #d554

A Selection of Hymns #LXV

Church Pastorals, hymns and tunes for public and social worship #766

Hymns for Social Worship, Compiled for the Use of Canadian Baptist Churches #d269

Display Title: Free grace in election First Line: Sons we are, through God's election Date: 1869
Hymns for Social Worship, Compiled for the Use of Canadian Baptist Churches #d269

The Devotional Hymn and Tune Book #157

The Ebenezer Selection of Hymns and Spiritual Songs, with an appendix Consisting of Miscellaneous Pieces. 6th ed. #d492

The Service of Song for Baptist Churches #d797