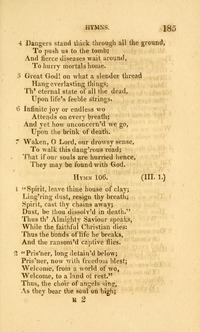 Spirit, leave thy house of clay

1 Spirit, leave thy house of clay;
Lingering dust, resign thy breath;
Spirit, cast thy chains away;
Dust, be thou dissolved in death!
Thus the mighty Saviour speaks,
While the faithful Christian dies;
Thus the bonds of life he breaks,
And the ransomed captive flies.


2 Prisoner, long detained below,
Prisoner, now with freedom blest,
Welcome from a world of woe;
Welcome to a land of rest:
Thus the choir of angels sing,
As they bear the soul on high,
While with hallelujahs ring
All the regions of the sky.


3 Grave! the guardian of our dust,
Grave! the treasury of the skies,
Every atom of thy trust
Rests in hope again to rise!
Hark! the judgment-trumpet calls--
Soul, rebuild thy house of clay:
Immortality thy walls,
And eternity thy day.

Source: The Voice of Praise: a collection of hymns for the use of the Methodist Church #918

Spirit, leave thine house of clay. J. Montgomery. [Death and Burial.] This, in its original form, is a poem in 14 stanzas of 4 lines. It was printed in Montgomery's Iris newspaper, July 14, 1803, and repeated in his Wanderer of Switzerland, and other Poems, in 1806, and again in his Poetical Works in 1828 and 1841. Its origin is explained in its title, which reads:—

”Verses to the Memory of the late Joseph Browne, of Lothersdale, one of the People called Quakers, Who suffered a long Confinement in the Castle of York, and Loss of all his worldly Property, for Conscience Sake."

To adapt the poem for congregational use stanzas i.-iv., xiii., and xiv., were slightly altered, and given in Collyer's Collection, 1812. This form was repeated in J. Conder's Congregational Hymn Book, 1836; the Leeds Hymn Book, 1853, and others, as "Spirit, leave thy house of clay."

All tunes published with 'Clothed With Immortality'^ top 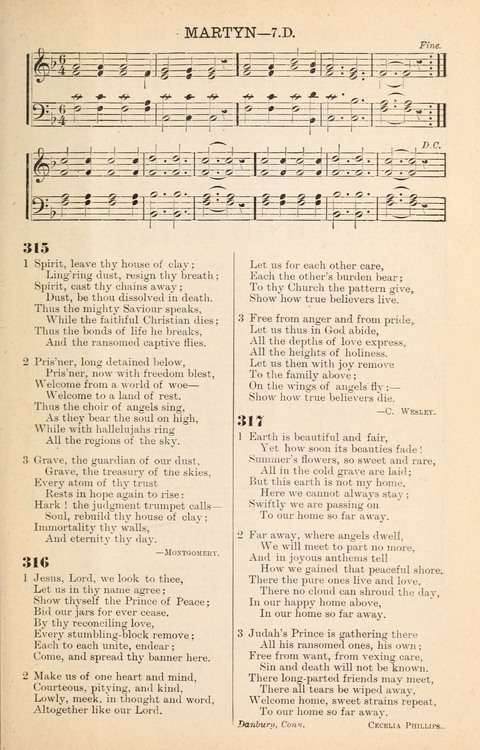 A Collection of Choral Hymns for the ... Hanson Place Methodist Episcopal Congregation #d164

Display Title: Clothed with immortality First Line: Spirit, leave thy house of clay Meter: 7th P. M. 8 lines 7s. Date: 1872 Subject: Time and Eternity | Death and Resurrection
A Collection of Hymns for the use of the African Methodist Episcopal Zion Church in America #1101

A Collection of Hymns, for the Christian Church and Home #355

A Collection of Psalms and Hymns for the Sanctuary #555

Additional Hymns, Adopted by the General Synod of the Reformed Protestant Dutch Church in North America, at their Session, June 1846, and authorized to be used in the churches under their care #306

Congregational Hymn and Tune Book; containing the Psalms and Hymns of the General Association of Connecticut, adapted to Suitable Tunes #1024

Display Title: Death of a saint First Line: Spirit, leave thine [thy] [the] house of clay Author: James Mongtomery Date: 1856
Congregational Hymn and Tune Book; containing the Psalms and Hymns of the General Association of Connecticut, adapted to Suitable Tunes #1024

Cottage Melodies; a hymn and tune book, for prayer and social meetings and the home circle #488

Hymnal of the Methodist Episcopal Church #1000

Hymnal of the Methodist Episcopal Church #1000

Hymns and Songs of Praise for Public and Social Worship #1318

Hymns for Church and Home #220

Hymns for the use of the Evangelical Lutheran Church, by the Authority of the Ministerium of Pennsylvania #602

Hymns for the Use of the Methodist Episcopal Church. Rev. ed. #1101

Hymns, Selected and Original, for Public and Private Worship #716

Plymouth Collection of Hymns and Tunes; for the use of Christian Congregations #1153

Prayers and Hymns for the Church and the Home #d596

Display Title: Freedom in death First Line: Spirit, leave thine [thy] [the] house of clay Author: James Mongtomery Date: 1866
Prayers and Hymns for the Church and the Home #d596

Psalms and Hymns, for Christian Use and Worship #H476

Songs in the Night; or Hymns for the Sick and Suffering. 2nd ed. #d157

The Clifton Chapel Collection of "Psalms, Hymns, and Spiritual Songs" #1430

The Halifax Selection of Hymns #d371

The Psalms and Hymns, with the Doctrinal Standards and Liturgy of the Reformed Protestant Dutch Church in North America #H738

The Springfield Collection of Hymns for Sacred Worship #460

The Tribute of praise and Methodist Protestant Hymn Book. #469

The Virginia Selection of Psalms and Hymns and Spiritual Songs #506