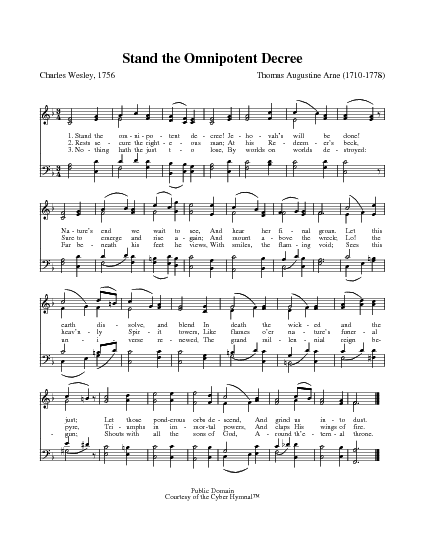 1 Stand, th' Omnipotent decree,
Jehovah's will be done!
Nature's end we wait to see,
And hear her final groan.
Let this earth dissolve, and blend
In death the wicked and the just;
Let those pond'rous orbs descend,
And grind us into dust.


2 Rests secure the righteous man;
At his Redeemer's beck,
Sure t' emerge and rise again,
And mount above the wreck;
Lo! the heavenly spirit towers
Like flames o'er nature's funeral pyre;
Triumphs in immortal powers,
And claps his wings of fire.


3 Nothing that the just to lose
By worlds on worlds destroyed;
Far beneath his feet he views,
With smiles, the flaming void;
Sees this universe renewed--
The grand millennial reign begun;
Shouts, with all the sons of God,
Around the eternal throne.


4 Resting in this glorious hope,
To be at last restored,
Yield we now our bodies up
To earthquake, plague, or sword;
Listening for the call divine,
The latest trumpet of the seven,
Soon our soul and form shall join,
And both fly up to heaven.

Source: The Voice of Praise: a collection of hymns for the use of the Methodist Church #916

Stand the omnipotent decree. C. Wesley. [Trust and Confidence in God.] This is No. 16 of 17 hymns published in 1756, as Hymns for the Year, 1756, Particularly for the Fast-day, Feb. 6, in 4 stanzas of 8 1. (Poetical Works, 1868-72, volume vi. p. 94). This Fast was held as a day of humiliation arising mainly out of a dread of an invasion by the French. C. Wesley's hymn was republished, without alteration, in the Wesleyan Hymn Book 1780, No. 60, and has since passed into a large number of collections in most English-speaking countries. It has received great praise at the hands of many writers. J. Montgomery in the preface to his Christian Psalmist, 1825, p. xxiv. says:—

"The hymn on the Day of Judgment, 'Stand the Omnipotent decree' begins with a note, abrupt and awakening like the sound of the last trumpet. This is altogether one of the most daring and victorious flights of our author. Such pieces prove that if Charles Wesley's hymns are less varied than might have been desired for general purposes, it was from choice and predilection to certain views of the Gospel in its effects upon human minds, and not from want of diversity of gifts."

This was written by Montgomery in ignorance of the fact that the hymn was directly associated with Young's Night Thoughts. In his private copy of his Christian Psalmist, 1825 he has written in pencil on the margin opposite the above quotation "a paraphrase from Dr. Young's Night Thoughts." Jackson in his concluding chapter of the Memoirs of C. Wesley quotes this hymn as one of "two examples of the manner in which C. Wesley occasionally availed himself of the writings of other men." He says (small ed., 1848, p. 488:—

"The just and striking sentiments contained in the Night Thoughts, often proposed with great abruptness and force, were exactly suited to Mr. Charles Wesley's peculiar temper and mental habits. He therefore esteemed this book next to the Holy Scriptures. Yet could he when occasion served surpass Young himself in living energy both of thought and expression.

Young began his Night Thoughts after the death of his wife and daughter in 1744. This would give the date of his lines as quoted, circa 1744, C. Wesley's date is 1756. We may add that line 4 in stanzas iv:—

"Yield we now our bodies up
To earthquake, plague, and sword,"

refers in the earthquake to the great earthquake which demolished the city of Lisbon on Nov. 1, 1755; the plague to the terrible mortality among the cattle which had been prevailing in various parts of England; and the sword to the invasion which was feared from France. These things made the strongest men in the land tremble.

All tunes published with 'The Final Conflagration'^ top 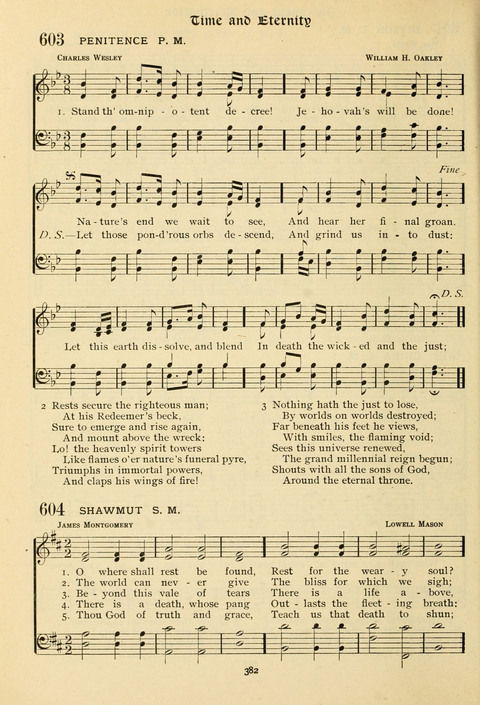