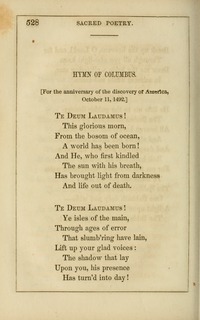 Te Deum laudamus, the most famous non-biblical hymn of the Western Church, intended originally (as it appears) for daily use as a morning hymn. It is not now known to the Eastern Church in a Greek form, though the first ten verses exist in Greek. In the West it is known to have been in use from the beginning of the 6th century as a hymn for the Sunday service for mattins before the lesson from the Gospel.

ii. The Text. As it is impossible to discuss the Date and Authorship and Origin and Intention of the hymn without a minute analysis of its text, there are four of the most ancient forms:
I. Irish Version.
II. Milan Version
III. Ordinary Version of the Hymn.
IV. Greek Version.

iii. Title. The hymn is found in many manuscripts without any title and so in some printed books. In earlier lieterature it is generally cited by is first three words. Later it is simply the Te Deum, and sometimes, though less commonly the Hymnus Ambrosianus. In the printed Breviaries the reference to St. Ambrose and St. Augustine is general in some form or other, though the hymn sometimes has not title.

iv. Date and authorship. The traditional attribution to St. Ambrose and St. Augustine has been traced up as far as the year 859, when Himemar of Rheims published his second dissertation On Predestination. The tradition trook fuller shape in a Milanese chronicle, now ascribed to Landulphus senior, who wrote in the 11th century.
v. Origin and Intention. Most students of the hymn now recognize the triple division of its 29 verses: (1) The “Te Deum” proper (1-11), preceded in the Irish text by the antiphon “Laudate pueri,” &c.; (2) the hymn “Tu rex gloriae” (12-21); (3) the antiphons “Salvum fac” and “per singulos dies”—in inverse order in the Milan text—followed in the common use by certain Preces, or ersicles and responses of which there are four sets in the current text (22-29).

vii. Liturgical Use. Palmer remarks that the usage prescribes the the first and second, who both appoint the hymn to be sung in the morning, is a kind of argument for their better acquaintance with the author’s design than the rule of Benedict who ordered it to be sung at the octurnal office on Sundays, i.e. on Saturday night. From Sundays its use seems gradually to have extended to Saints’ Days, and from the reglar to the secular clergy.

viii. Musical Settings. One musical setting only of the Te Deum is to be found in the choro-liturgical books of the Western Church. Although slight differences appear in various dioceses, these are never more than mere local embellishments or variations, such as are constantly to be met with in local versions of the melody of the Preface, Pater Noster, and other invariable portions of the Latin services. It seems that the ancient melody was known to the musicians of some of the Lutheran Churches down to at least the middle of the 18th century. We come across fragments of it amongst Buxtehude's Vorspiele, and also in those of Bach. The metrical translations of the Te Deum into English are in almost every instance the prose translation in the Book of Common Prayer turned into metre. That translation beginning "We praise Thee, 0 God" was given in the Book of Common Prayer in 1549. The translator is unknown. 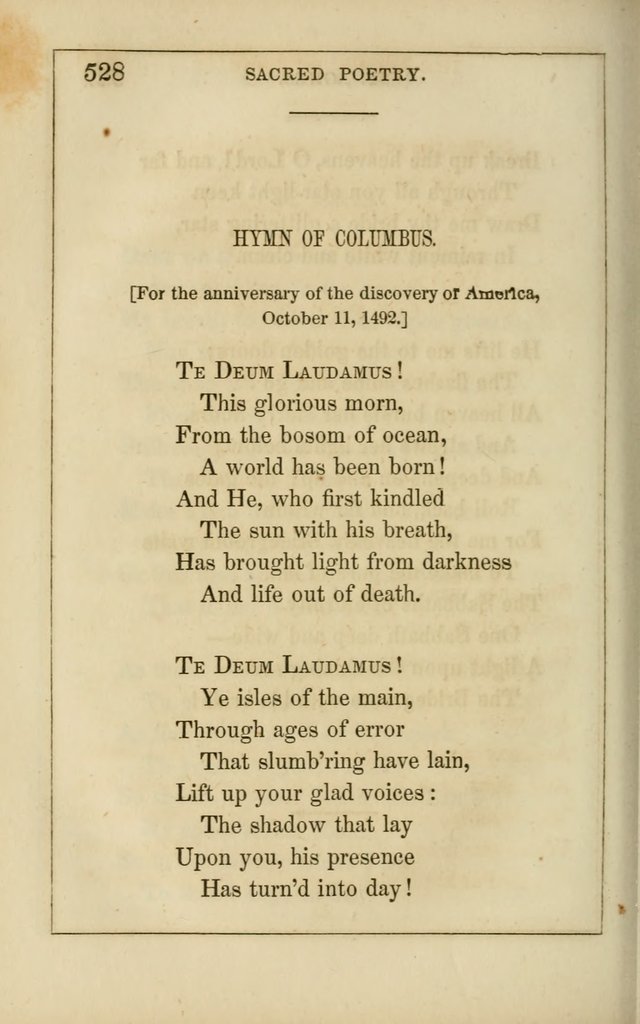 View Page
Lyra Catholica: containing all the hymns of the Roman breviary and missal, with others from various sources. Arranged for every day in the week, and the festivals and saints' days... (1851), p.530
^ top