Told in the Market-Place 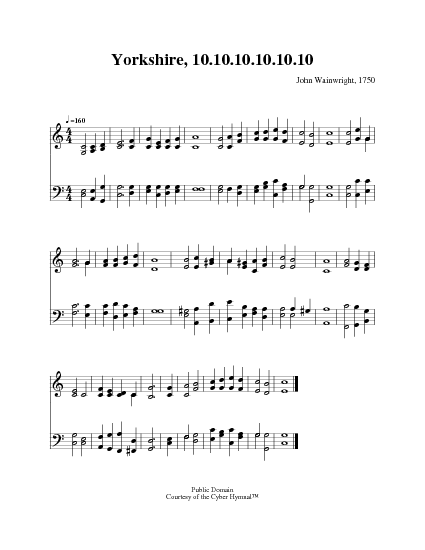 That day the doves with burnished silver breasts

1. That day the doves with burnished silver breasts
Uneasy were; we, halt and blind and lame,
Within the temple waited, ugly guests,
Hoping, in spite of filth, disease and shame;
Outside the multitude waved branches green
Calling, Hosanna to the Nazarene.


2. I shrank close to the roof-prop, for my eyes
Were dead to seeing: but heard I the coins,
The piles of clinking silver shekels rise,
Poured from sheiks’ bags and belts ’round merchant loins;
I heard the purple priced; and in between
Far off, Hosanna to the Nazarene.


3. I could not see Him enter, but I heard
The multitude and smelled the dusty throng:
Old Anab brushed me with his ragged beard,
Muttering, Kneel, thou! He will speak ere long.
Yea—though five time more leprous I had been
I would come here to implore the Nazarene.


4. But then the woman Terah, ill of pox,
Began to whimper, See, He bringeth woe!
He overturns the booths, the treasure box,
Eyes blazing on the sellers. Let us go!
He’ll scourge us, smite us! Tush! It is well seen
We shall be cursèd of the Nazarene.


5. A form swept past us, we in terror caught
A man’s clear voice of anger: then the sound
Of fleeing feet of traffickers, onslaught
On booths, and tables crashing to the ground.
I heard the money scatter and careen
Under the spurning of the Nazarene.


6. Rachel, a maiden, clutched my sleeve, and shrank
With me behind the curtain, and the crowd
Surged wildly past. For us, our dear hopes sank
Under that stern voice cutting like a goad,
Judging, arraigning, charging; ’mid the spleen
Of money-changers, stood the Nazarene!


7. This temple is My house, the House of Prayer!
His voice was like the wind that whips the leaves.
But with your buyings and your sellings there
Ye—ye have made My house a den of thieves.
Then little Rachel sobbed, Awful is His mien;
His eyes are flames; I fear the Nazarene.


8. But when the temple silenced—while a dove
Fluttered and soared and beat against the roof,
We frightened beggars heard a voice of love
Calling us gently; then His tender proof
He gave. He healed us! I, who e’er had been
Blind from my birth—I saw the Nazarene!

John Wainwright (b. Stockport, England, 1723; d. Stockport, 1768) wrote YORKSHIRE for [the] text [Christian's awake, salute the happy morn, by John Byrom] in 1750. The tune was first sung on Christmas Day, 1750, in the parish church of Stockport; it was first published in Caleb Ashworth's Collection…

All tunes published with 'Told in the Market-Place'^ top