The man that views his guilt and sin With clear, enlightened eyes 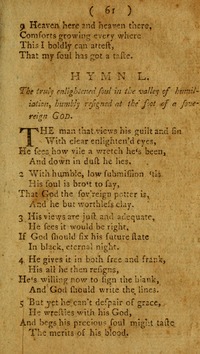 The man that views his guilt and sin With clear, enlightened eyes

1 The man that views his guilt and sin
With clear enlighten'd eyes,
He sees how vile a wretch he's been,
And down in dust he lies.


2 With humble, low submission 'tis
His soul is bro't to say,
That God the sov'reign patter is,
And he but worthless clay.


3 His views are just and adequate,
he sees it would be right,
If God should fix his future state
In black, eternal night.


4 He give it in both free and frank,
His all he then resigns,
He's willing now to sign the blank,
And God should write the lines.


5 But yet he can't despair of grace,
He wrestles with his God,
And begs his precious soul might taste
The merits of his blood.


6 He pleads the merits of the Lamb,
That his poor soul may live;
He can't be willing to be damn'd,
Such language he doth give.


7 "The souls condemn'd to endless flames
"Blaspheme the God above,
"While heav'nly saints in highest strains,
"Do praise redeeming love.


8 "Should I be doom'd to endless woe,
"To burn forever more,
"'T would never pay the debt I owe,
"Nor cancel all the score.


9 "Ten million years in fire and smoke,
"Amidst the livid flame,
"Will gain no credit on thy book,
"The debt is still the same.


10 "But if by Christ my soul is freed,
"He will my surety stand,
"And every mite will then be paid,
"Which justice can demand.


11 "If such a brand of fire as I,
"Should now be pluck'd from hell,
"How would the winged seraphs fly,
"Such blessed news to tell.


12 "To Father Son, and Holy Ghost,
"What Glory would redound?
"How would the spotless heav'nly host,
"Their golden trumpets sound?


13 "Must I despair of future bliss,
"And to withdraw my suit?
"No, God forbid, since mercy is
"Thy darling attribute.


14 "My ardent cries shall still ascend,
"While I have power to speak,
"And if I perish in the end,
"I'll die beneath thy feet."


15 The man that's brought to such a case,
God won't his suit deny;
But he will give him saving grace,
And lift his soul on high.


16 The one in three, and three in one,
All glory is their due,
From beings far above the sun,
And human creatures too. 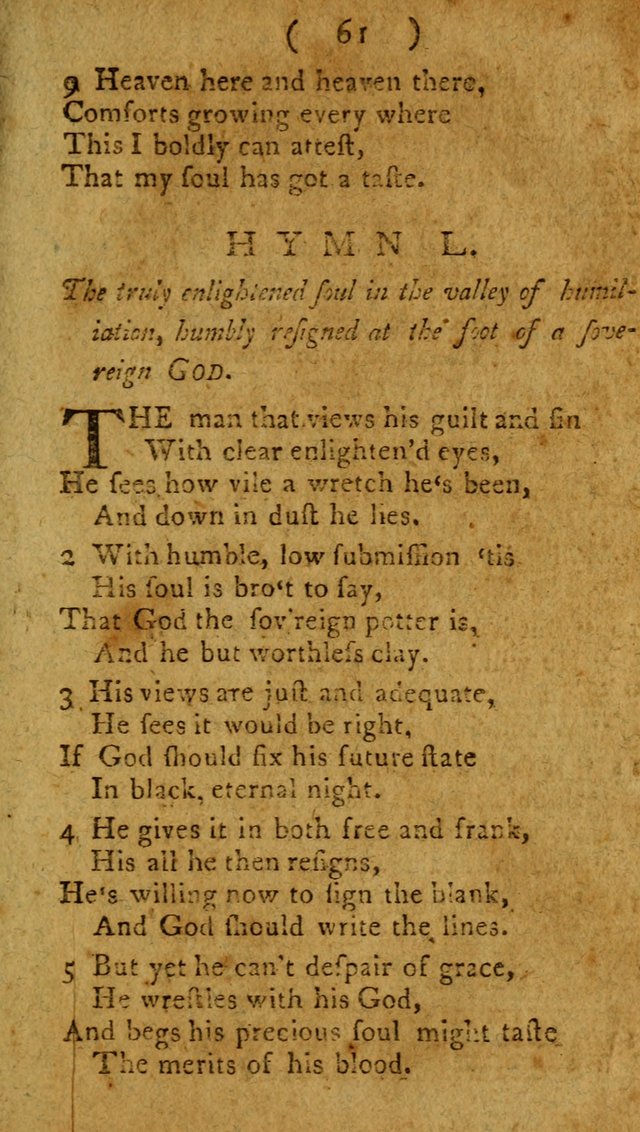 View Page
Divine Hymns or Spiritual Songs, for the use of religious assemblies and private Christians: being a collection (1802), p.66
^ top

Divine Hymns or Spiritual Songs, for the use of religious assemblies and private Christians #L

Display Title: The truly enlighted soul in the valley of humiliation, humbly resigned at the foot of a sovereign God First Line: The man that views his guilt and sin Date: 1802
Divine Hymns or Spiritual Songs, for the use of religious assemblies and private Christians #L