The publican and the pharisee 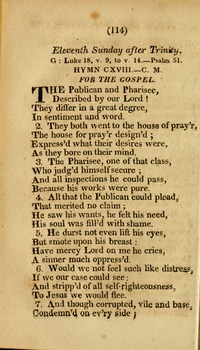 The publican and the pharisee

1 The Publican and the Pharisee,
Described by our Lord!
They differ in a great degree,
In sentiment and word.


2 They both went to the house of pray'r,
The house for pray'r design'd;
Express'd what their desires were,
As they bore on their mind.


3 The Pharisee, one of that class,
Who judg'd himself secure;
And all inspections he could pass,
Because his works were pure.


4 All that the Publican could plead,
That merited no claim;
He saw his wants, he felt his need,
His soul was fill'd with shame.


5 He durst not even lift his eyes,
But smote upon his breast;
Have mercy Lord on me he cries,
A sinner much oppress'd.


6 Would we not feel such like distress,
If we our case could see:
And stripp'd of all self-righteousness,
To Jesus we wold flee.


7 And though corrupted, vile and base,
Condemn'd on ev'ry side;
Yet through the Saviour's love and grace,
We shall be justified.


Source: Church Hymn Book: consisting of newly composed hymns with the addition of hymns and psalms, from other authors, carefully adapted for the use of public worship, and many other occasions (1st ed.) #CXVIII

Church Hymn Book; consisting of hymns and psalms, original and selected. adapted to public worship and many other occasions. 2nd ed. #241