"The reign of God is near at hand" 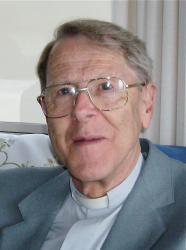 Norman J Goreham is a presbyter in the Methodist Church of New Zealand. Born and educated in England, he developed a love of Christian hymns as a boy during the Second World War, when, his mother, a devout woman, would sing hymns to her family during air raids to keep everyone’s spirits up. However he did not start writing hymn texts himself until he retired. Ordained in 1958, he served in England, West Africa and the United States of America before taking up residence in New Zealand in 1976. He holds honors degrees in theology from two British universities, is married and has two adult children and two adult grandchildren. He was the winner of the 1977 contest for a hymn to celebrate the 25th anniversary of the Association of Presb… Go to person page >
^ top

All tunes published with 'A Man Called John'^ top