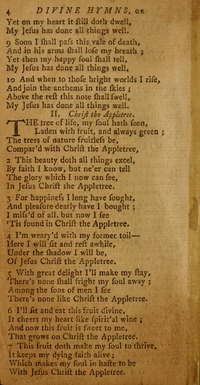 The tree of life my soul hath seen

1 The tree of life my soul hath seen,
Laden with fruit, and always green:
The trees of nature fruitless be
Compared with Christ the apple tree.


2 His beauty doth all things excel:
By faith I know, but ne’er can tell
The glory which I now can see
In Jesus Christ the apple tree.


3 For happiness I long have sought,
And pleasure dearly I have bought:
I missed of all: but now I see
’Tis found in Christ the apple tree.


4 I’m weary with my former toil,
Here I will sit and rest awhile:
Under the shadow I will be
Of Jesus Christ the apple tree.


5 This fruit doth make my soul to thrive,
It keeps my dying faith alive;
Which makes my soul in haste to be
With Jesus Christ the apple tree.

Richard Hutchins was a Calvinist Baptist minister who served at Long Buckby, Northamptonshire, England, from about 1759-1765. Dianne Shapiro, from "Richard Hutchins: the poet of 'The Tree of life my soul hath seen (Jesus Christ the Apple Tree)" by Gerald Montagu posted on the Fasola Discussion Group (Google Group) accessed 2/9/2017 Go to person page >
^ top

The poem was attributed to "R.H." in The Spiritual Magazine, 1761 and collected into the book Divine, Moral, and Historical Miscellanies, in Prose and Verse... (London, 1761). The poem was later republished in A Handful of Flowers compiled by Rev. C. Chandler and published by Axtel and Pardon, London, in 1768. Since The Spiritual Magazine was a magazine for Calvinistic Baptists, "R.H." contributed additional poems to this magazine, one of which identifies him as being from Long Buckby and a minister by the name of Richard Hutchins served the Calvinist Baptist congregation in Long Buckby from about 1759-1765, it is likely that "R.H." refers to Richard Hutchins.

Dianne Shapiro, from "Richard Hutchins: the poet of 'The Tree of life my soul hath seen (Jesus Christ the Apple Tree)" by Gerald Montagu posted on the Fasola Discussion Group (Google Group) accessed 2/9/2017

All tunes published with 'Christ the Appletree'^ top 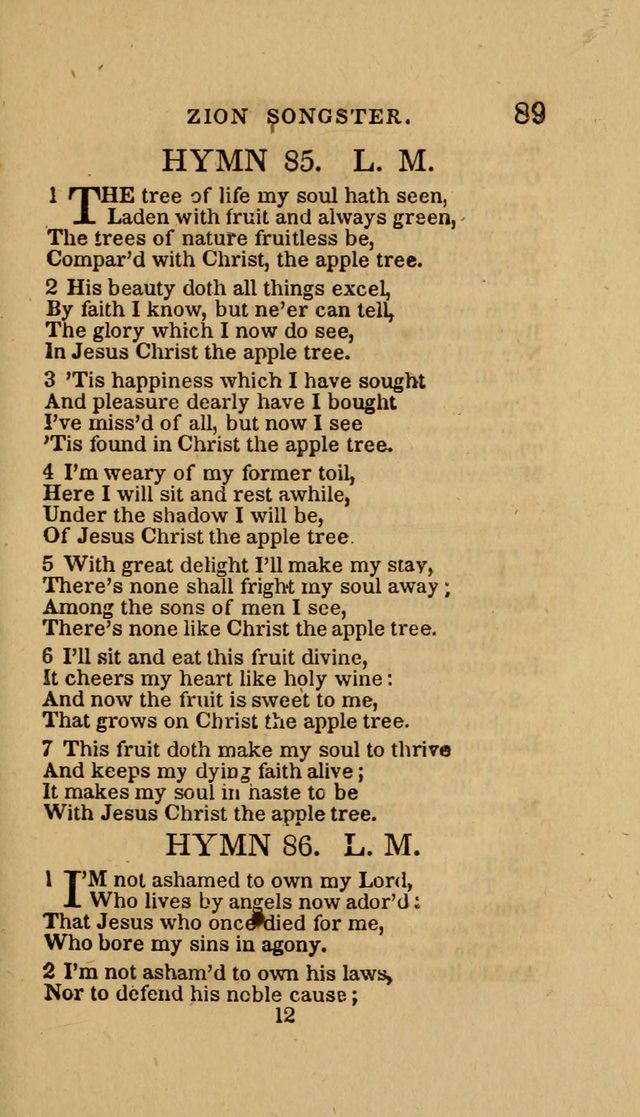 View Page
The Zion Songster: a Collection of Hymns and Spiritual Songs, Generally Sung at Camp and Prayer Meetings, and in Revivals or Religion (95th ed.) (1854), p.96
^ top

A New Hymnal for Colleges and Schools #461

A New Hymnal for Colleges and Schools #462