The voice that breathed o'er Eden 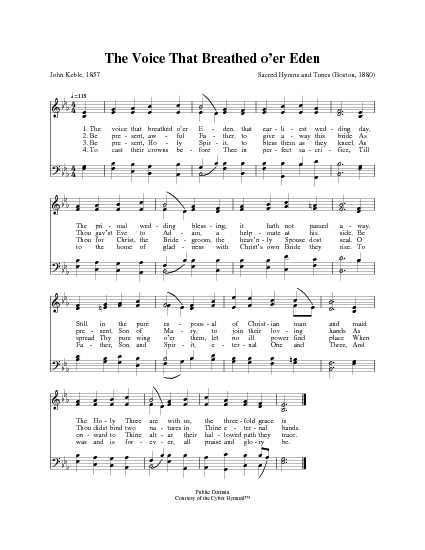 The voice that breathed o'er Eden

1 The voice that breathed o’er Eden,
That earliest wedding day,
The primal marriage blessing,
It hath not passed away.


2 Be present, gracious Saviour,
To join their loving hands,
As thou didst bind two natures
In thine eternal bands.


3 O spread thy pure wing o’er them!
Let no ill power find place,
When onward through life’s journey
The hallowed path they trace.


4 Till to the home of gladness,
With Christ’s own bride they rise,
And cast their crowns before thee
In endless Paradise.


Source: The Song Book of the Salvation Army #949

The voice that breathed o'er Eden. J. Keble. [Holy Matrimony.] Written for and first published in the Salisbury Hymn Book, 1857, where it was given as No. 187, in 8 stanzas of 4 lines. In the author's posthumous Miscellaneous Poems, 1869, it is headed "Holy Matrimony. To be sung at the Commencement of the Service," and is dated "July 12, 1857." In Biggs's annotated edition of Hymns Ancient & Modern, 1867, it is rendered into Latin by Lord Lyttelton (1866) as "Elle Edenaeas qui Patris Deus." The original is in extensive use, and is one of the most beautiful of modern hymns for Holy Matrimony.

John Bacchus Dykes (b. Kingston-upon-Hull' England, 1823; d. Ticehurst, Sussex, England, 1876) wrote HARTFORD in 1872 for the text “The Voice that Breathed o'er Eden” on the occasion of a friend's wedding. The American tune title HARTFORD refers to the capital of Connecticut. The tune is known…

All tunes published with 'The voice that breathed o'er Eden'^ top 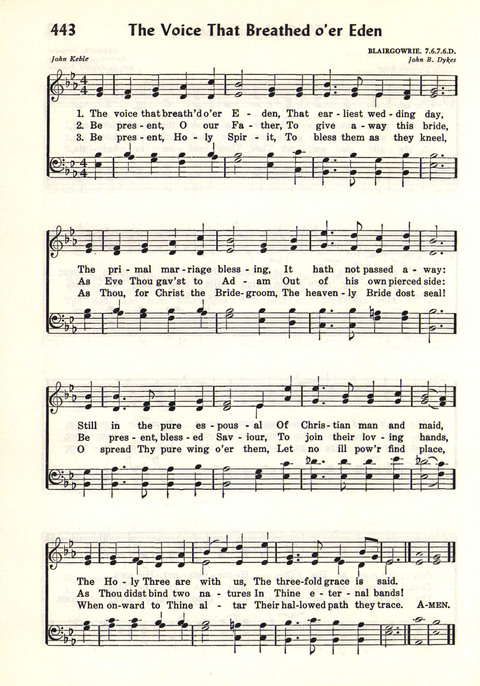 The Song Book of the Salvation Army #949