There's not a star whose twinkling light 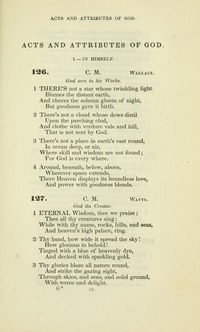 There's not a star whose twinkling light

Wallace, James Cowden, was born at Dudley, circa 1793. He was brother of the Rev. Robert Wallace (1791-1880), Professor of Theology in Manchester New College, and author of Antitrinitarian Biography. J. C. Wallace was Unitarian minister at Totnes, 1824, and afterwards at Brighton and Wareham. He died at Wareham in 1841. He was a prolific hymnwriter, and contributed various other poetical pieces to the Monthly Repository. In a Selection of Hymns for Unitarian Worship, by R. Wallace, Chesterfield, 1822, there are 13 of his hymns, and in the 2nd edition of the same, 1826, there are 29 more. There are also 10 of his hymns in the Dukinfield Selection of Psalms & Hymns for Christian Worship, 1822 (still in use), and 64 in Beard's Collection of H… Go to person page >
^ top

There's not a star whose twinkling light. J. C. Wallace. [God seen in Nature.] This hymn appeared in A Supplement to the 4th edition of Robert Aspland's Selection of Psalms and Hymns for Unitarian Worship, London: Rowland Hunter, 1825, No. 48, in 5 stanzas of 4 lines, and entitled "The Creator seen in his Works." As it has undergone rearrangement and enlargement, we give the opening line of each stanza:—

In J. R. Beard's Unitarian Collection of Hymns, &c, Lond.: J. Green, 1837, to which Mr. Wallace contributed more than sixty hymns, this hymn was given in 6 stanzas, and is rearranged thus:—

In the new edition of Mr. Beard's Collection, 1860, another arrangement with changes is introduced, which leaves the hymn thus:—

From these outlines the construction of the hymns, "There's not a place," &c, and "There's not a tint," &c, as in Curwen's Child’s Own Hymn Book, Major's Book of Praise, the Methodist Sunday School Hymn Book and many others, including American collections, may easily be traced, and a reference to Aspland's and Beard's works, as above, will correct the text. In Major's Book of Praise for Home & School the author is said to be John Aikman Wallace, and in the Prim. Methodist Sunday School Hymn Book, 1879, Heber, but both are in error.

THERE'S NOT A STAR 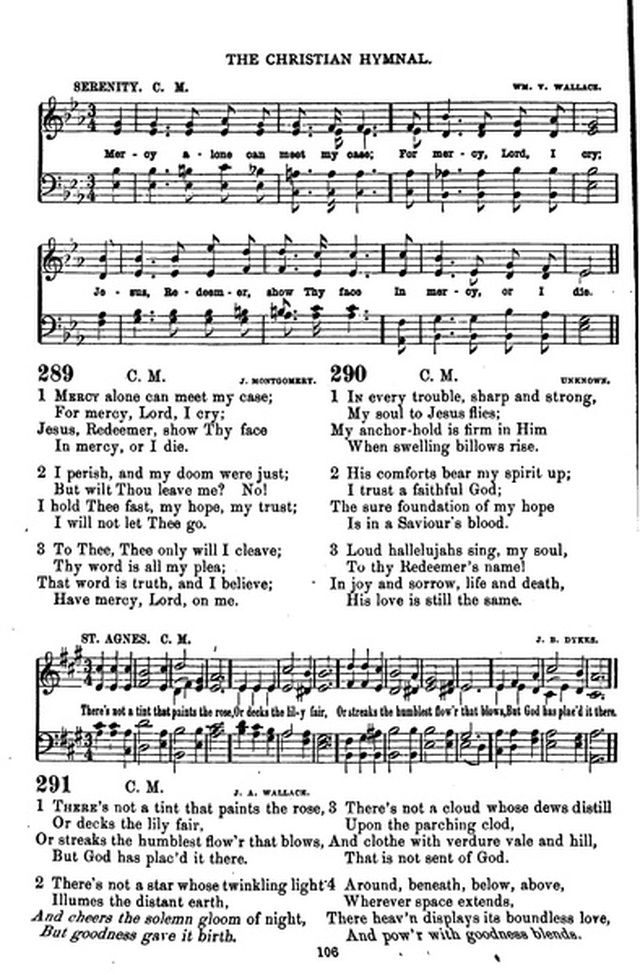 View Page
The Christian hymnal: a collection of hymns and tunes for congregational and social worship; in two parts (Rev.) (1882), p.106
^ top

A Collection of Hymns, for the use of the United Brethren in Christ #26

A Collection of Hymns, for the use of the Wesleyan Methodist Connection of America. #11

A Manual of Devotion and Hymns for the House of Refuge, City of New York #25

Hymnal and Ritual Services for the Union Gospel Church #d103

Hymns and Poetry for the Young #d127

Hymns for the Use of the Brethren in Christ #d499

Hymns, Selected and Original, for Sunday Schools of the Evangelical Lutheran Church #d435

Ocean Melodies, and Seamen's Companion #93a

Prayers and Hymns for the Church and the Home #d695

Songs for Social and Public Worship #446

Songs for Social and Public Worship #471

The American Vocalist #303a

The Child's Pocket Companion, Being a Selection of Choice Hymns for Sabbath School, with an Analysis to Most of Them #d62

The Harmoniad and Sacred Melodist #d134

The Polyphonic; or Juvenile Choralist; containing a great variety of music and hymns, both new & old, designed for schools and youth #61b

The Public School Hymnal, for the Use of High Schools and Seminaries. New and enl. ed. #d244

Zion's Hymns, for the Use of the Original Free-Will Baptist Church of North Carolina #d262