Justification by Faith, not Works 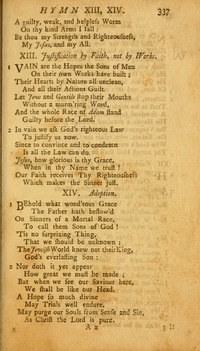 Vain are the hopes the sons of men

1 Vain are the hopes the sons of men
upon their own works have built;
their hearts by nature are unclean,
their actions full of guilt.
2 Silent let Jew and Gentile stand,
without one vaunting word;
and, humbled low, confess their guilt
before heav'n's righteous Lord.


3 No hope can on the law be built
of justifying grace;
the law, that shows the sinner's guilt,
condemns hi to his face.
4 Jesus! how glorious is thy grace!
when in thy name we trust,
our faith receives a righteousness
that makes the sinner just.

Vain are the hopes the sons of men. I. Watts. [Justification by Faith.] Published in his Hymns and Sacred Songs, 1709, Bk. i., No. 94, in 4 stanzas of 4 lines, and headed “Justification by Faith, not by Works; or, The Law condemns, Grace justifies, Rom. iii. 19-22." In the Draft of the Scottish Translations and Paraphrases, 1745, it was given unaltered; in that of 1751 it was slightly changed; and in the authorised issue of the Translations and Paraphrases, 1781, No. xli., st. i., ii. were rewritten, but began with the original first line as above; st. iii. was taken from the Draft of 1751; and st. iv. unaltered from Watts. In the markings by the eldest daughter of W. Cameron these alterations are attributed to him. The use of the 1781 form of the text is far more extensive than that of the original.

All tunes published with 'Justification by Faith, not Works'^ top 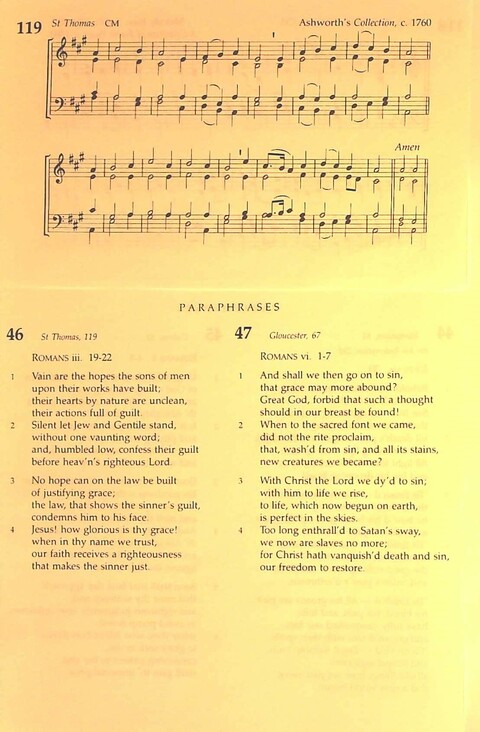