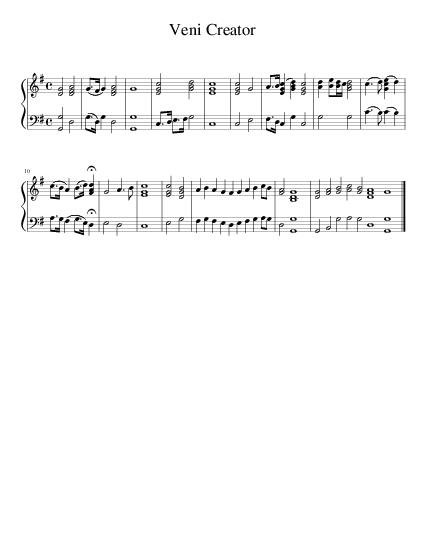 Rabanus Maurus (c. 776-856) or Hrabanus Magnentius Maurus, was born of noble parents at Mainz, and educated at Fulda and Tours under Alcuin, who is reputed to have given him the surname, Maurus, after the saint of that name. In 803, he became director of the school at the Benedictine Abbey at Fulda. He was ordained priest in 814, spending the following years in a pilgrimage to Palestine. In 822, he became Abbott at Fulda, retiring in 842. In 847, he became archbishop of Mainz. He died at Winkel on the Rhine, February 4, 856. This distinguished Carolingian poet-theologian wrote extensive biblical commentaries, the Encyclopaedic De Universo, De Institutione Clericorum, and other works which circulated widely during the Middle Ages. Som… Go to person page >
^ top

Veni Creator Spiritus, Mentes tuorum visita. [Whitsuntide.] In annotating this great hymn we shall deal (i.) with the manuscripts and the various forms of the Text; (ii.) with its Authorship and Date; and lastly (iii.) with the differences found in its Use.
i. Manuscripts and Text. From the 12th century onwards manuscripts of this hymn are innumerable, as it is commonly found in the Hymnals, Breviaries, &c, of almost all churches of the West. Before the 12th century copies are much less plentiful.
ii. Authorship and Date. It is curious how very little is known of the authorship of this hymn, which has taken deeper hold of the Western Church than any other mediaeval hymn, the Te Deum alone excepted. The real author is as yet unknown, but it has been ascribed (α) to the Emperor Charles the Great (Charlemagne), (ß) to St. Ambrose, (γ) to Gregory the Great, and to (δ) Rhabanus Maurus. The evidence is too scanty to draw a positive conclusion. The hymn is clearly not the work of St. Ambrose nor of Charles the Great. Nor is there sufficient evidence to allow us to ascribe it either to Gregory the Great, to Rhabanus Maurus, or to any of the ecclesiastics connected with the court of Charles the Fat. The references to the hymn do not help us much in determining the authorship, as the following facts will show.
The closing lines:—

have been thought to imply that the hymn was written after the Council of Aachen (Aquisgranum or Aix-la-Chapelle) in 809, when the doctrine of the Double Procession was definitely promulgated. The hymn however does not emphasize the doctrine in any way, and similar language was used in the Western Church from a very early period.
iii. Use. In mediaeval times the singing of this hymn was generally marked with special dignity, by the ringing of bells, the use of incense, of lights, of the best vestments, &c. Its use in the Hour Services at Pentecost can be traced back, with tolerable certainty, to the 10th century. The earlier manuscript for the most part allot it only to Vespers, and so late as the 14th century Radulf, Dean of Tongres, giving the “Veni Creator" for Vespers, says that at the lesser hours “more Romano" the hymn was never changed. But some time before this date it had certainly been adopted in some churches at Tierce, for a St. Alban's Breviary of the 12th century gives it for this service and not for Vespers; and this was also the Sarum use. In two Mozarabic service-books of the 11th century, now in the British Museum, viz. a Breviary (Add. 30848), and an Antiphonary (Add. 30850), it is assigned to Lauds. It is also ordered for use at Lauds, as well as Vespers, in a German Breviary, circa 1100, now in the British Museum (Add. 18302); but otherwise its use at Lauds seems to be quite exceptional. In the Ordination Service its use has not been traced earlier than the 11th century.

Veni Creator Spiritus, Mentes, p. 1206, ii. Bp. Bickersteth has translated this as "Creator Spirit, make Thy throne" (tr. in 1880), and includes it with the Latin text and an extensive note in the 1890 ed. of his Hymnal Companion Several additional translations and altered forms of old renderings of this hymn are known to us; but being of minor importance are omitted here. 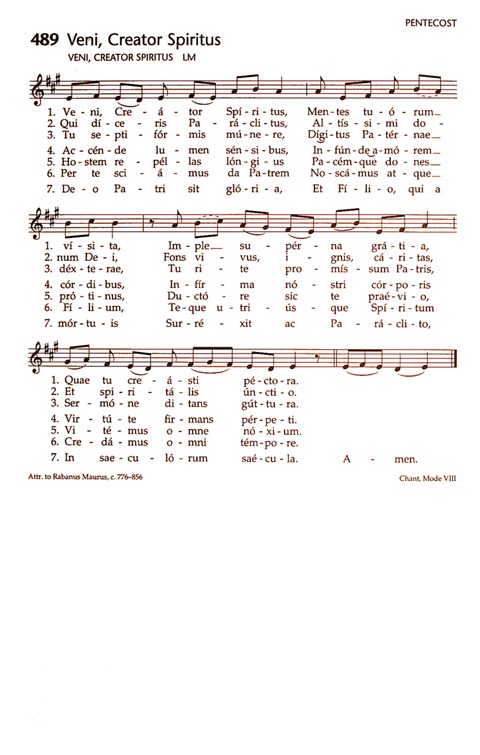