We keep the festival of the slain Lamb 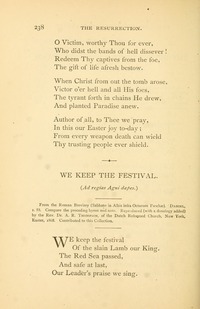 We keep the festival of the slain Lamb

Thompson, Alexander Ramsay, D.D., a minister of the American Reformed Dutch Church, was born at New York, Oct. 22, 1812, and graduated at the New York University, 1842, and the Princeton Seminary, 1845. He was Reformed Dutch Pastor at various places, including East Brooklyn, St. Paul's (R. P. D.), New York City, North Reformed Church, Brooklyn (1874), and others. Dr. Thompson was joint editor of the Reformed Dutch Hymns of the Church, N. Y., 1869, and the Hymns of Prayer and Praise, 1871. He has contributed original hymns and translations from the Latin to these collections, to Schaff’s Christ in Song, 1869, and to the Sunday School Times, Philadelphia, 1883, &c. In addition two original hymns:— 1. 0 Thou Whose filmed and fading eye.… Go to person page >
^ top

*Ad regias Agni dapes. The Roman Breviary version of the Ambrosian Ad coenam Agni providi, above. It is the hymn at Vespers, "Sabbato in Albis," i.e. on Saturday in Easter-week, and afterwards on Sundays and week-days, when no Festival occurs and the Ferial Office is said, till the first Vespers of the Ascension. In addition to the ordinary editions of the Roman Breviary the text is given in several modern Roman Catholic hymnals, Card. Newman's Hymni Eccl., 1838-65; Biggs's Annotated edition of Hymns Ancient & Modern, 1867; Daniel, i. No 81, &c. [Rev. W. A. Shouts, B. D.]
Translation in common use:—
We keep the Festival. By A. R. Thompson, contributed to Schaff’s Christ in Song, 1869. 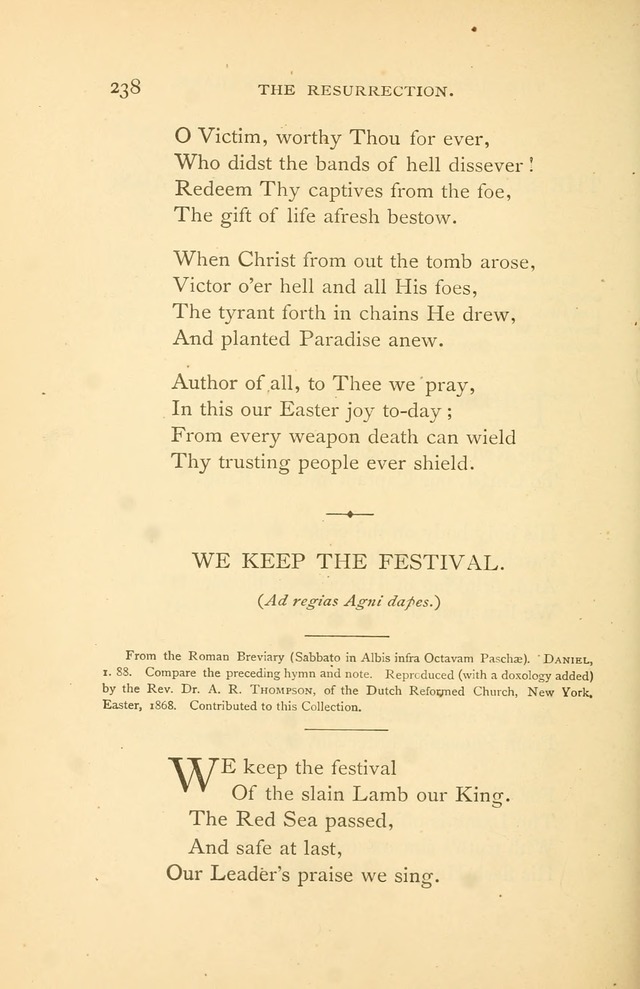