We should possess the Savior's mind 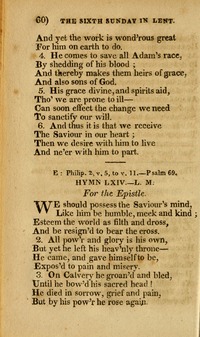 We should possess the Savior's mind

1 We should possess the Saviour's mind,
Like him be humble, meek and kind;
Esteem the world as filth and dross,
And be resign'd to bear the cross.


2 All pow'r and glory is his own,
But yet he left his heav'nly throne--
He came, and gave himself to be,
Expos'd to pain and misery.


3 On Calvery he groan'd and bled,
Until he bow'd his sacred head!
He died in sorrow, grief and pain,
But by his pow'r he rose again.


4 He hath ascended up on high!
He reigns above, beyond the sky--
And ev'ry knee to him shall bow,
In heav'n above, and earth below.


5 Immortal honors there he claims!
His name exceeds all other names:
None such on earth, or yet in heav'n
As that which god to him has giv'n.


6 Not Men or Angels e'er can raise,
Such notes as fully sound his praise;
Yet let us join with them to sing
the praises of the Lord our King.

Source: Church Hymn Book: consisting of newly composed hymns with the addition of hymns and psalms, from other authors, carefully adapted for the use of public worship, and many other occasions (1st ed.) #LXIV

Church Hymn Book; consisting of hymns and psalms, original and selected. adapted to public worship and many other occasions. 2nd ed. #130

Display Title: We should possess the Savior's mind First Line: We should possess the Savior's mind Scripture: Philippians 2:5-11 Date: 1838 Subject: For the Gospels and Epistles |
Church Hymn Book; consisting of hymns and psalms, original and selected. adapted to public worship and many other occasions. 2nd ed. #130
All instances^ top
Suggestions or corrections? Contact us