When Jesus in the temple stayed 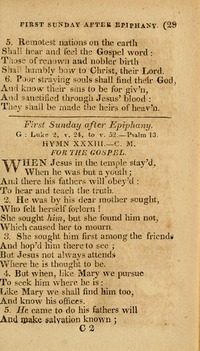 When Jesus in the temple stayed

1 When Jesus in the temple stay'd,
When he was but a youth;
And there his fathers will obey'd:
To hear and teach the truth.


2 He was by his dear mother sought,
Who felt herself forlorn!
She sought him, but she found him not,
Which caused her to mourn.


3 She sought him first among the friends
And hop'd him there to see;
but Jesus not always attends
Where he is thought to be.


4 But when, like Mary we pursue
To seek him where his is:
Like Mary we shall find him too,
And know his offices.


5 He came to do his fathers will
And make salvation known;
The plan and order to reveal
In which it must be done.


6 Could I like Mary, feel distress'd
When absent from this face;
My soul could never be at rest
Till I could feel his grace.


7 Then, like as Mary I should find
My comforts all renew'd:
Faith, hope, and joy and peace of mind,
And union with my God.

Source: Church Hymn Book: consisting of newly composed hymns with the addition of hymns and psalms, from other authors, carefully adapted for the use of public worship, and many other occasions (1st ed.) #XXXIII

Church Hymn Book; consisting of hymns and psalms, original and selected. adapted to public worship and many other occasions. 2nd ed. #68