Wherefore Do the Nations Rage 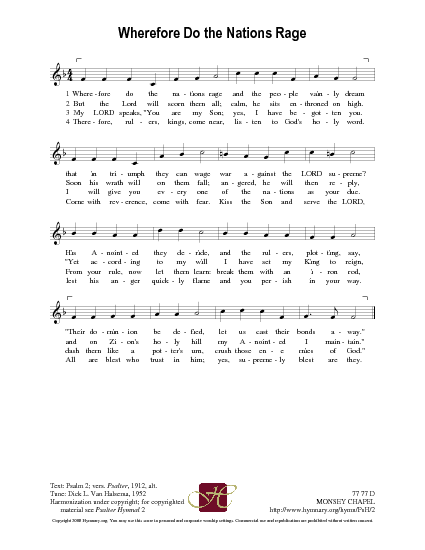 Wherefore do the nations rage

1 Wherefore do the nations rage
and the people vainly dream
that in triumph they can wage
war against the LORD supreme?
His Anointed they deride,
and the rulers, plotting, say,
"Their dominion be defied,
let us cast their bonds away."


2 But the Lord will scorn them all;
calm, he sits enthroned on high.
Soon his wrath will on them fall;
angered, he will then reply,
"Yet according to my will
I have set my King to reign,
and on Zion's holy hill
my Anointed I maintain."


3 My LORD speaks, "You are my Son;
yes, I have begotten you.
I will give you every one
of the nations as your due.
From your rule, now let them learn:
break them with an iron rod,
dash them like a potter's urn,
crush those enemies of God."


4 Therefore, rulers, kings, come near,
listen to God's holy word.
Come with reverence, come with fear.
Kiss the Son and serve the LORD,
lest his anger quickly flame
and you perish in your way.
All are blest who trust in him;
yes, supremely blest are they.

A coronation song for God's anointed, proclaiming the new kings triumPh over his enemies.

This messianic psalm about Yahweh's anointed king from David's line applies both to earthly kings and to David's greatest Son, who now reigns on David's throne (Luke 1:32; Acts 13:33). In the ancient world the power of a newly crowned king was usually challenged by subject monarchs and peoples; here, too, those who would resist the reign of God's anointed conspire to throw off the "chains" of God (v. 3) and of his appointed Son (w. 7, 12). The versification is from the 1912 Psalter, with alterations mainly in stanzas 3 and 4. It follows the psalm's thematic structure closely: first comes the almost incredulous "Why?"-What folly funds their dreams!-(st. 1); then we hear God's laughter and rebuke (st. 2); next, the Messiah confidently announces God's imperial proclamation enthroning him (st. 3); and that calls forth a warning to the rebels to submit with joy or taste the wrath of God and his Son (st. 4). The phrase "You are my Son" (st. 3) is quoted several times in the New Testament.

Liturgical Use
Advent, Easter, Ascension, and other celebrations of the enthronement of the LORD's anointed.

The tune is from the second chorus of Felix Mendelssohn's (PHH 279) Festgesang (Op. 68) for male voices and brass; it was first performed in 1840 at the Gutenberg Festival in Leipzig, a festival celebrating the anniversary of Gutenberg's invention of the printing press. Mendelssohn's tune is similar…

[Wherefore do the nations rage]

All tunes published with 'Wherefore Do the Nations Rage'^ top 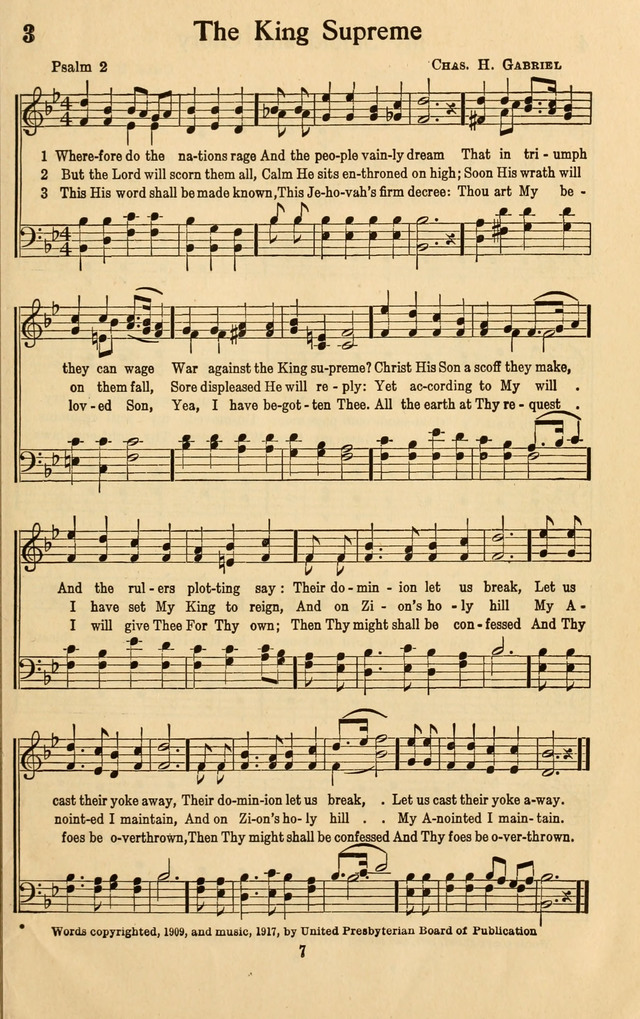